Inside the Party: New Yorkers for Children Gala With Emmy Rossum, Olivia Palermo, and Nicky Hilton

“New Yorkers for Children is such an amazing charity,” Nicky Hilton said as she arrived to the ballroom of the Mandarin Oriental wearing a dress by Valentino, who sponsored the organization's 10th anniversary Spring Dinner Dance, after being the first sponsor a decade ago. Valentino’s presence—despite current designers Maria Grazia Chiuri and Pier Paolo Piccioli nowhere in sight—remained deeply felt, from the flutter of dresses that filled the 36th floor ballroom to the event design crafted by David Stark, who used Valentino’s latest collection as inspiration to use cherry blossoms (hauled in from North Carolina) and over 1,200 silver mirrored candles to “spring” the room to life. Emmy Rossum (in Dior) relaxed during the meal for only a moment before leaping to her feet when DJ D-Nice played the Jackson 5’s “I Want You Back—just as the arctic char had been served—starting a vivacious and lively dance party that lasted through midnight, with Rebecca Minkoff, Erin Heatherton, and DJ Harley Viera Newton busting moves to classics by The Eurythmics and the Bee Gees, as well as and pop hits by Rihanna and Florence Welch. Olivia Palermo (in Katie Ermilio) kept her swaying to the sidelines with boyfriend Johannes Huebl, moving her Jimmy Choo shoes to Alicia Keys and Jay-Z’s “Empire State of Mind.” The event raised $625,000 for New Yorkers for Children—the most ever in the gala's history—money that supports youth in foster care in New York City. “It’s important to bring everyone together to give back,” said Palermo, describing a feeling validated by each of the 450 guests in the room. Learn more about the cause at newyorkersforchildren.org. 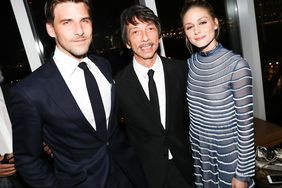