Where did the biggest stars of the Grammys go after the show? To party with InStyle! We teamed up with Warner Music Group—along with Heineken and Mini Cooper—to co-host a post-Grammys bash at the Chateau Marmont in West Hollywood, where stars including Amy Smart, Alessandra Ambrosio, and Abbie Cornish (in Roland Mouret) stopped by to celebrate music’s biggest night. “I love music and grew up with music,” Cornish told InStyle.com. “For me, music comes from the very beginning of my childhood. My parents played certain CDs, and they stay with you.” Rocker Sting, who attended with wife Trudie Styler, kept up the high energy of the night following his performance with Bruno Mars and Rihanna during the Bob Marley tribute. “I thought it was a really great show,” Sting said. “The acts were great and the atmosphere was wonderful, and I was very happy to be part of it.” Click through to see more stars who celebrated the Grammys with InStyle! 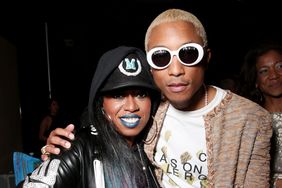