What better way to celebrate the 2016 Tony Awards nominees than to pack the talented, vivacious set into one colorful, neon-lit ballroom smack in the heart of New York’s Theater District? That’s exactly what went down Thursday afternoon at the Diamond Horseshoe inside the Paramount Hotel, where a cast of Broadway’s finest actors, directors, playwrights, choreographers, sound experts and more gathered for a luncheon to fête this season’s most beloved plays, musicals, and most importantly, each other.

Epitomizing diversity in show business, the occasion drew bold-faced names from standout shows like Blackbird, Eclipsed, Noises Off, and The Color Purple. However, it was this year’s buzziest production, Hamilton, that attracted the likes of show creator and star Lin Manuel-Miranda (above, left, nominated for Best Performance by an Actor in a Leading Role), Renée Elise Goldsberry, Leslie Odom Jr., and Christopher Jackson, to name a few.

Miranda was the man of the hour, staying long after the early afternoon event wrapped and mingling with fellow nominees like InStyle April 2016 cover beauty Lupita Nyong’o (above, right, in Elie Saab), most recently recognized for her killer performance in Eclipsed. As usual, Nyong’o didn’t fail to put her winning smile and A+ fashion on display in a black floral piece, but she naturally wasn’t the only one, stopping to chat with nominated Hamilton actress Phillipa Soo (above left), who dazzled in an off-the-shoulder yellow number.

Meanwhile, Golden Globe-winning star Michelle Williams (above, left), who’s being lauded with a Best Performance by an Actress in a Leading Role nomination for her role in Blackbird, made the rounds and greeted fellow on-stage performers like Long Day’s Journey Into Night’s Jessica Lange (above, right).

Meet the Top Nominees for the 2016 Tony Awards

Williams once more turned to Louis Vuitton for a sporty, daytime-appropriate frock and continued to greet a bevy of stars like two-time Tony winner Swoosie Kurtz (above, left) and Blythe Danner (above, right), who arrived dressed in a perfectly tailored pink satin Max Mara suit with a matching Whitney bag from the brand.

Broadway’s gentleman won in the fashion department, too. Proving that a little friendly competition is healthy, School of Rock—The Musical’s Alex Brightman (above, left) kept it casual in a denim blue shirt with a gold tinted tie, while the always-handsome She Loves Me star Zachary Levi (above, right), nominated for Best Performance by an Actor in a Leading Role in a Musical, the same category as pal Brightman, won us over with his charm and a spring-friendly light blue jacket.

Between brief speeches that included a comedic list of rules about what not to do if you’re called up to accept a Tony come June 12, The Color Purple’s Cynthia Erivo (above, left) joined forces with co-star Danielle Brooks (above, right) and She Loves Me’s Laura Benanti (above, center left) and Jane Krakowski (above, center right, in a Bibhu Mohapatra dress).

Together, the ladies lent their good spirits—and hopes for a win—permeate the room. 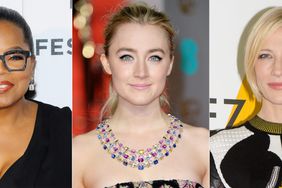 Oprah Winfrey, Saoirse Ronan, and Cate Blanchett to Present at the 2016 Tony Awards 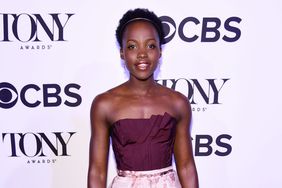