Netflix Dropped Some Major News About The Crown

Not only do we know who will play Queen Elizabeth, we also know when the show will end.

In a double-whammy for fans of The Crown, Netflix dropped some major news on Friday: actress Imelda Staunton is confirmed to be next in line to play Queen Elizabeth, and the show will be ending after the fifth season.

"At the outset I had imagined The Crown running for six seasons but now that we have begun work on the stories for season five it has become clear to me that this is the perfect time and place to stop," creator Peter Morgan said in a statement to The Hollywood Reporter.

Staunton, perhaps best known for playing Professor Dolores Umbridge in the Harry Potter series, will take over the reigns from Olivia Colman, who played the Queen for the third season as well as the fourth, which is currently in production. Colman took on the role from Claire Foy, who played Queen Elizabeth for the first and second seasons.

In a statement announcing her casting, Staunton said, "I have loved watching The Crown from the very start. As an actor it was a joy to see how both Claire Foy and Olivia Colman brought something special and unique to Peter Morgan’s scripts. I am genuinely honoured to be joining such an exceptional creative team and to be taking The Crown to its conclusion."

Staunton was first rumored to be playing the Queen last year, though Netflix quickly deflected at the time by saying that they had not "commissioned any further seasons as yet, therefore any news on casting remains pure speculation."

Season three, which dropped on Netflix in December, has won Colman a Golden Globe, and the show itself was won the SAG award for outstanding performance by an ensemble in a drama series earlier this month. 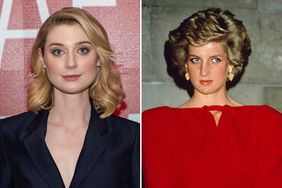