Iman is paying tribute to her late husband David Bowie on the second anniversary of his death.

“You will always be part of us. Jan 10th #BowieForever #EverAndEver,” Iman captioned the post.

The day prior on Tuesday, she also shared a series of black-and-white photos of herself cozying up with Bowie and wrote alongside it, "My favorite love story is ours. #BowieForever #ForeverAndEver." 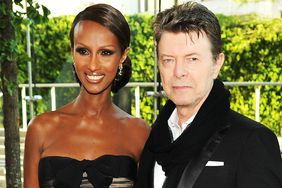