The family and friends of Oscar de la Renta gathered today for a private memorial service celebrating the designer, who passed away on Oct. 20 at age 82, following a long battle with cancer. Held at the Church of St. Ignatius Loyola at Park Avenue and 84th Street in New York City, the service attracted a large crowd of notables, all who came out to pay their respects to the beloved fashion icon.

Throughout his life, Mr. de la Renta had quite the following of remarkable women—click through our gallery to see all of Oscar's leading ladies, from Audrey Hepburn to Sarah Jessica Parker and Hillary Clinton. 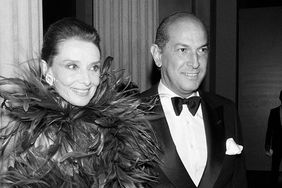