With 146 days until the first installment of The Hunger Games hits theaters, Lionsgate just released eight new movie posters so we can see what most of the leading characters will look like! The one we’re most excited about is Effie Trinket, played by Elizabeth Banks, who escorts District 12 tributes Katniss (Jennifer Lawrence) and Peeta (Josh Hutcherson) to the Games. In the book, Effie is known for her vibrantly-hued wardrobe, hair, and makeup, which translates into the movie version with fuchsia eye shadow and white hair, shown here. To see more of the characters go from book to big screen, click through the gallery. And, until the movie’s release on March 23, 2012, we must say: May the odds be ever in your favor. 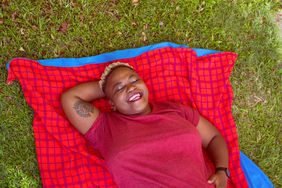