How to Wear Red Eye Shadow: Nail It Like Lupita Nyong'o

Though red is an expected color when it comes to your lipstick, it's rarely one seen on your eyes—unless of course you're Lupita Nyong'o and can work just about any makeup look imaginable. Last night the star once again demonstrated that beauty rules were meant to be broken by teaming her deep green Jason Wu number with a shimmery brick-toned shadow for the Glamour Women of the Year awards in New York City. "Red eye shadow is usually something people might be intimidated by, but the key is to find the right red, keeping the balance, and doing it in small doses," her makeup artist Nick Barose tells us. If you have deep skin like Nyong'o, follow in her lead with a jewel-toned ruby, but ease up on the intensity and veer toward terracotta shades if your complexion is fair.

Placement is also an important factor to pulling off the effect. "On Lupita, we kept the red pretty much just on her upper lids, and not all around the eyes," the pro says. "That would have been too much if the red is framing the entire eye." Barose used the Lancôme Color Design Palette in Ruby Affair ($50; lancome-usa.com) on the star, concentrating the oxblood tone on her upper lids.

If you want to amp up the intensity, Barose recommends using a damp shadow brush or sponge to apply the shadow. Because red shadow can wash you out on its own, you'll need to ground the color with an inky black liner. "It's important to still define the eyes when using color like this so they don't just look red and shapeless," he says. "I traced black liquid liner along the upper lash lines, and waterproof black pencil liner on the inner rims of the lower lash lines, then added two coats of black mascara."

In lieu of a nude lip, Barose finished the look with a deep garnet lip to keep the color consistent, and opted for the Lancôme Color Design Lipstick in Bow and Arrow ($23; lancome-usa.com). "It's the perfect way to add a statement, but keep it wearable and monochromatic," Barose adds. 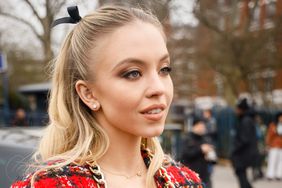 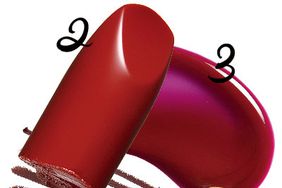 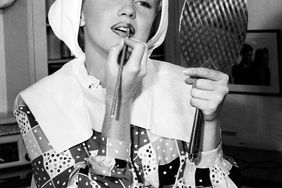 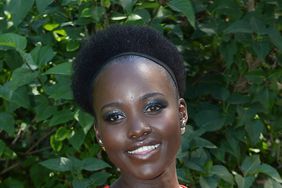 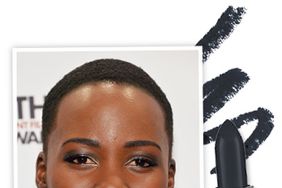