The 4 Chillest Hollywood Breakups of All Time

Sure, some Hollywood breakups are messy. Like, really messy. But as a recent crop of Hollywood stars are beginning to prove, it is, in fact, possible to remain on good terms with your ex — and they can even become pals with your current partner.

Here, some shining examples of exes and new flames who are keeping things photo opp friendly.

When Gwyneth Paltrow and Chris Martin split in 2014, following their elopement in 2003, they did so amicably, famously describing their separation as “consciously uncoupling.” Now the couple, who parent 14-year-old Apple and 12-year-old Moses Martin together, have continued to remain as constants in each other’s lives, despite the fact that Martin, 41, is currently dating actress Dakota Johnson, and Paltrow, 46, just recently married TV producer Brad Falchuk.

Back in 2017, the actress shared a photo of her then-fiancé Falchuk hanging out with her ex-husband for a Sunday brunch, and based off the big grins on their faces, it looks like everybody had a great time.

31 Celebrities Who Are Still Friends with Their Exes

Jennifer Lopez and ex-husband Marc Anthony seem to have mastered the art of co-parenting, even while dating other people. The two Latin sensations married in 2004, splitting seven years a later in 2011, before becoming officially divorced in 2014. Despite no longer being together, the 49-year-old singer still gets along well with Anthony, 50, with whom she shares 10-year-old twins Max and Esme.

This past summer, the former lovers attended their daughter’s dance recital together, along with J.Lo’s current boyfriend, Alex Rodriguez, 43. Judging from the love in the photo, we’d say the meeting was hardly awkward.

When it comes to maintaining a healthy relationship with an ex, Lenny Kravitz is a pro. Following his divorce from actress Lisa Bonet in 1993 after 6 years of marriage, the rockstar has remained close with his former flame (who he told Mr. Porter is his “best friend”). He even served as the 51-year-old’s date to the Met Gala back in 2015, alongside with their 30-year-old daughter, Zoe Kravitz.

But Kravitz isn't just besties with Bonet, he’s also pretty friendly with her current husband Jason Momoa, who she married in 2017. Apparently, the pair are so tight that they even have matching skull rings, according to the Aquaman star’s Instagram.

Kravitz wins the award for the most low-key ex in Hollywood, because the star remains on good terms with not just one ex, but two of them. The singer dated actress Nicole Kidman from 2002 to 2003, and at one time the pair was even rumored to be engaged, according to Vanity Fair. Following, their break-up, the former couple remained friendly, often catching up at various awards show.

Such is the case in 2013, when they bumped into each to other at the CMT Music Awards in Nashville, which the Oscar winner attended with her country music-singing husband Keith Urban. Looking at the hug shared between the two men, we'd say there’s hardly any bad blood. 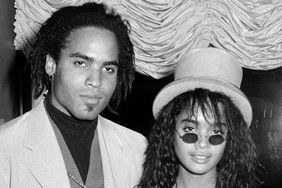