Viewers who tuned into the Grammys Sunday night were in for a surprising political cameo when Hillary Clinton popped up during a pre-taped segment alongside other stars.

The sketch had artists auditioning to read the audiobook for Michael Wolff's controversial book Fire and Fury, which details his time experience reporting on the Trump administration. While more expected musicians like John Legend, Cher, Cardi B, and Snoop Dog graced the screen and showed off their audiobook-voicing skills, Corden saved the most unexpected for last.

Hillary Clinton—who won a Grammy herself in 1997 for It Takes a Village—gave a passage from Wolff's book a read, causing the Grammy audience to audibly gasp and applaud.

"He had a long time fear of being poisoned. One reason why he likes to eat at McDonald's," Clinton read. "Nobody knew he was coming and the food was safely premade."

Once she was done, host James Corden immediately showed his approval.

"That's it, we've got it," Corden said to her, cutting off her reading.

TBD on whether or not this will ultimately make it's way to the audiobook airwaves, but with a Grammy already under Clinton's belt, it's not impossible. 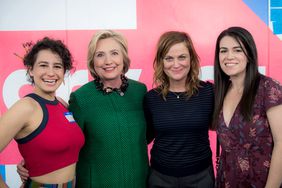