Today, Henry Golding can walk down the most crowded street in Singapore and go unnoticed, but for the star of this summer's hotly anticipated Crazy Rich Asians—the 31-year-old's first ever acting gig—that's all about to change.

Based on Kevin Kwan’s best-selling trilogy, the film, a sure blockbuster, is also an overdue win for onscreen diversity. With industry heavyweights like Constance Wu and Ken Jeong signed on, Crazy Rich Asians is the first big-budget, non-period film in 25 years (the last being The Joy Luck Club in 1993) to feature an all-Asian ensemble cast. The thrilling, complex epic follows Singaporean heir Nick Young (Golding) and his American-born fiance Rachel Chu, who first learns about his family’s aristocratic wealth shortly before they marry in China’s most-talked-about wedding. The movie, opening Aug. 15, doesn’t whitewash the cultural backdrop against which it’s set—or pander to any of the tired stereotypes that have long been pushed onto Asian actors in mainstream television and film.

“You can have Asians being leading men that are sex symbols,” Golding says, calling the project a breakthrough for Asian representation in the film industry. “You can have leading women powering through.”

The casting call was met with applause from Asian actors and a viral victory dance on social media—which is exactly what made Golding, formerly best known as a BBC travel presenter, initially hesitant to throw his hat in the ring. He turned down several offers to audition for the lead role of Nick, before eventually booking the part.

“I was like, ‘I’m sure they’ll want to do the role justice. I’m sure they’re going to get a seasoned actor to portray this beautiful character,’” says Golding, who wondered whether he was ready to take on such a culturally important role. “I always knew that [acting] was my end goal, in the back of my head.” But he was waiting for “the right time, when I was mentally ready, so I declined a few times.” The search for Nick took Warner Bros. much longer than expected, though, and eventually Golding was ready to sign on.

In the end, there was public backlash over his casting, but not because of his lack of experience. Fans of the books questioned whether Golding, whose mother is Malaysian and father is English, was “Asian enough” for the part. “It’s fair,” he says of the debate, though initially he felt defensive. “I always think, ‘What is the litmus test for being Asian enough?’ I’ve grown up half of my entire life in Asia. I was born in the jungles of Borneo. I’ve been to every single Asian country apart from Myanmar, on work, listening to human interest stories, giving me a broad outlook on all Asian cultures. But it’s OK for [someone] who’s never been to Asia to says, ‘Oh no, he’s definitely not Asian enough.’”

Ultimately, Golding, who moved from his native Malaysia to the UK at age 7, felt the dialogue his casting sparked was a good sign. “There should be a conversation about it, because if there wasn’t, I think we wouldn’t be able to educate people. There are allowed to be questions like that, because the past has dictated that roles have been whitewashed.”

But here, he assures, “That wasn’t the case. I was the one who fit the role as perfectly as possible for [director] Jon [M. Chu], after seeing everybody. I literally was the last person they saw.”

The tale of how Golding came up for consideration is something of an epic itself. During casting, one of the producers was told by an employee on her team that, five years prior, she’d met a man at a party who, in her eyes, was the embodiment of Nick Young. That man was Golding, whose name made its way to Chu. And after scrolling 40 weeks deep into Golding’s social media platforms, Chu realized he'd found his man.

That Instagram follow was the key to how Golding fell in love with the character himself. “I hadn’t actually read [the book] until I caught whisperings of [director Jon M. Chu] following me on Instagram. That was really weird and rather serendipitous,” he says. Golding had already dismissed the notion of auditioning, but he was newly intrigued. “It was literally the day before I was heading to Tokyo for a holiday, so I was like, ‘Oh, it’s a perfect holiday book. I’ll just read it anyway. I don’t know why he’s following me on Instagram.’ And so I read it furiously—and I loved it. I didn’t realize how funny and how connected to my Asian life I’ve been living for the past 10 years it was.”

Now, he tends to agree with the woman at that party who saw Golding as a real-life Nick. “It was probably the most perfect character I could ever be cast in,” he says, explaining that they’re both self-made and fiercely independent but loyal. “[Nick] has never wanted to be defined by his family fortune, so he left to carve out his own existence away from his family and the riches. At the core of it, it’s the love for his family and Rachel, his friends, that always rings true. That’s his guiding light.” Golding himself doesn’t happen to be aristocratically wealthy, but “I didn’t have to think of pretending because it’s not Nick at all. And that’s the turmoil he has to go through when he goes back to Singapore. He has to deal with all these cousins and exes, and his mother Eleanor trying to pressure him into coming back and being the heir to this ridiculous throne.”

After that vacation, Golding auditioned, did a chemistry read and a screen test, and the role was his.

Since becoming one of the faces of the Crazy Rich Asians franchise, Golding has booked roles in two other films, A Simple Favor (in which he plays Blake Lively’s husband) and Saigon-set drama Monsoon.

“I’m in this very strange sort of area of limbo where I have three films that I’ve filmed—which are so different in subject and feel—and nothing has come out,” he says. “I’m in a fantastic position where I can still walk down Orchard Road in Singapore, which is, like, the busiest street and shopping district, and live an ordinary life, walk down in my PJ’s, and grab a coffee. I think when the film comes out that might be a different story."

Editor’s note: It definitely will be.

Golding says he hopes audiences are able to fall so deeply in love with the world of CRA that they recognize that on top of being a watershed precedent with statement-making cast, it’s also just a really, really good movie.

"Normalization of ethnicity is the most important takeaway,” he says. “Once you get enveloped in this world and this story, you forget that it’s all Asians on screen. You forget that it’s set in Asia. It’s just doing justice to the material, and that’s what storytelling is all about. We need to reach that stage of normalization, and then we can all just enjoy the wonderful stories that people write. If there’s a voice that comes out of [the film], it can do wonders.” 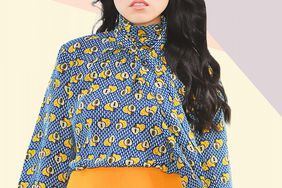