Hamilton has been the hottest ticket on Broadway all summer—and it shows no sign of slowing down in the coming months. Written by and starring In the Heights creator Lin-Manuel Miranda, the rap-driven musical about Alexander Hamilton’s life offers a powerful retelling of history with a hip-hop twist. And it’s garnered a ton of buzz, with celebrities such as Samuel L. Jackson, Jennifer Lopez, and Sarah Jessica Parker among those raving about the play on social media after scoring much-coveted seats to the show.

Broadway veteran Renée Elise Goldsberry, who’s starred in The Lion King and The Color Purple, portrays Hamilton’s sister-in-law Angelica Schuyler Church in the musical’s eight shows each week. On a recent Monday when Broadway was “dark,” she stopped by InStyle’s New York City offices to chat about starring in the summer’s buzziest show—and she revealed why it continues to live up to the hype. “I think it’s really resonant because it’s not just one style of music—it’s not just a hip-hop story,” said Goldsberry. “It’s kind of like a playlist, because it’s a cross-section of so many styles of music. There’s R&B, music theater—a lot of everything.”

The diverse soundtrack has elevated the show to hit status, but so has the relatable underdog tale at its core. “Lin has said that when you’re talking about Alexander Hamilton, you’re talking about a man who came from nothing,” Goldsberry explained. “He was in a really dire set of circumstances, and he wrote his way out of it and pulled himself up by his bootstraps through his words and his actions. And that’s also the story of a hip-hop rapper.”

Miranda’s inspiration for Goldsberry’s character was one particularly vocal rapper: Nicki Minaj. “I freaking love Nicki Minaj, but I never thought I would be cast to be Nicki Minaj,” she said. But she was, and so she took on the role of Angelica Schuyler Church. “She’s a really smart and empowering woman—but it’s very clear that she’s a bit clipped by the time that she lives in,” Goldsberry said. “She really would have been someone like Alexander Hamilton or George Washington if women could have done that back then.”

While she may not have been a politician, Goldsberry’s character plays an integral role in the play’s plot. “Angelica introduces her little sister to [Hamilton], and she goes on to become his wife,” said Goldsberry, adding that her character is “doing everything that a woman can to influence history.” That includes “holding court with people like Thomas Jefferson and marrying someone in London.” There, Angelica “is very ‘in’ with the designers of the time,” according to Goldsberry.

What the Stars are Saying About Broadway's Hottest Play, Hamilton

When it comes to its characters’ wardrobes, Hamilton may be stuck back in the 18th century—but the cast’s hair and makeup is very much modern. “As the female leads, we kind of have a Destiny’s Child thing going,” Goldsberry said, adding that she’s “learned to sing and rap” in her corseted costumes. “My big number is in the second act,” she said. “It’s called ‘Satisfied,’ and it’s the first time you see something so fun and fast-paced in the show.” And the song is pivotal to the story. “At the beginning of my number, time stops and we start rewinding,” said Goldsberry. “We go back and show the audience things from another perspective, which is pretty cool. It’s a weird convention for theater that people haven’t done before, and it feels like a film for a moment as you see what’s going on behind the scenes.”

Thanks to its unique style, Hamilton continues to exceed expectations. “I think that seeing it is really crazy for the audience,” Goldsberry said, noting that “hype normally ruins things, but it hasn’t ruined our show.” And she offers a logical explanation for that. “I think it’s just so hard to explain what Hamilton really is,” said Goldsberry. But for those who have seen it, the reactions have been passionate. “People don’t have a lot to say afterwards, but sometimes they’re really emotional.”

As for the cast, they’re still taking it all in, too. “To be part of a show at the beginning is just a really cool experience,” said Goldsberry. “You kind of have a freedom to do it any way you want.” Plus, they’re excited for the future of Hamilton. “There will be a million girls who play this role [after me], and I’m really excited about coming back ten years from now to see what someone else does that I did, and something she found that I never discovered,” said Goldsberry. “It’s a pretty beautiful thing.” 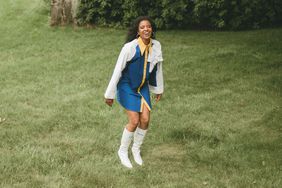