'Tis the season of all thinks kooky and spooky, and we couldn't be more excited. As the countdown to Halloween 2017 begins, some celebrities are clearly just as pumped, because the costumes have already started showing up on red carpets and Instagrams alike, and they are fabulous.

Lauren Conrad is getting into the holiday spirit with a Cruella de Vil-inspired costume that fully makes her a good girl gone bad.

"If she doesn't scare you no evil thing will," she captioned the photo on Instagram.

"I almost always make my Halloween costumes from scratch—the process usually involves cutting, sewing, and a whole lot of tulle," she wrote on her website. "But this year, I found myself with a little less time on my hands (I'm sure my fellow new mothers can relate … ), so I opted for a less time-consuming costume."

For more celebrity costume tricks and treats, scroll through our list of the best star costumes from Halloween 2017.

Ariana Grande and Mac Miller as Katinka and Mugatu

Ms. Grande and her rapper boyfriend channeled Katinka and Mugatu from cult classic Zoolander this Halloween. Believe us when we say we're digging the singer's nostalgic homage—in fact, it might just be the best thing since orange mocha frappuccinos ...

The singer went dressed up as Angelina Jolie's version of the Disney villain while celebrating Halloween with her sons Nelson and Eddy.

The model and her NFL player hubby came up with quite the on-trend costume this year.

The couple paid homage to the 1947 musical comedy Copacabana with their costumes, even dressing their daughter Luna up as a pineapple.

Heidi Klum as a werewolf

The model was unrecognizable as a werewolf from Michael Jackson's "Thriller" music video at her very own Halloween party.

Demi Lovato as a cop

Fergie and Axl Jack as Tinker Bell and Peter Pan

The newly single singer was the Tink to her son's Peter Pan this Halloween.

Jenna Dewan and Channing Tatum as Sally and Jack

The couple dressed up as characters from The Nightmare Before Christmas at their daughter Everly's request.

Kourtney Kardashian and Younes Bendjima as Bonnie and Clyde

The duo went all-out this Halloween by channeling the infamous convict lovers.

Kylie Jenner and Jordyn Woods as an angel and the devil

The pregnant reality star and her BFF had a low-key Halloween dressed as polar opposites.

The reality star even had Selena's dance move down in this epic costume.

The supermodel went to her own Halloween-slash-birthday bash dressed as Buttercup from the Powerpuff Girls.

Jenner's BFF joined in on her group costume as another Powerpuff Girl: Bubbles.

Claudia Schiffer as a Power Ranger

Carrie Underwood and Mike Fisher as a deer and hunter

"The only deer I am OK with [Mike Fisher] 'catching!'" the vegan singer joked in the caption.

The star transformed into Pretty in Pink's Andie and Ducky in this hilarious couples costume.

Paris Hilton as a bunny

The heiress made one sexy rabbit this Halloween.

Zigi dressed as Spider-Man and The Black Cat for Halloween. "Spidey's girl HAPPY HALLOWEEN from #FeliciaHardy, The Black Cat," she captioned the photo on Instagram.

Jessica Simpson, is that you? The star dressed as Willie Nelson for Halloween, while her husband went as Waylon Jennings.

Mom-to-be Khloé Kardashian dressed up as the Mother of Dragons from Game of Thrones, while her boyfriend Tristan Thompson dressed as Khal Drogo. "Moon of my life," she captioned the photo on Instagram.

"Hurry, hurry! Step right up and behold the Burtka-Harris Halloween Carnival of Curiosities!" NPH captioned the photo of their epic family Halloween costume.

Alessandra Ambrosio and Jamie Mazur as a skeleton and Deadpool

The model and her hubby may not have done a couples costume, but they looked great together regardless.

Shay Mitchell as a zombie bride

The Pretty Little Liars star even rocked colored contacts for this terrifying costume.

Cardi B as Cruella de Vil

L.C. isn't the only one feeling the Disney villain spirit this Halloween. Cardi B stepped out in a Cruella outfit of her own, complete with a matching pooch.

Sarah Paulson and Holland Taylor as a panda and Harley Quinn

We never would've paired Harley Quinn with a panda bear, but seeing these two together, it just makes sense.

Hudgens didn't have an obvious reference for her costume, but at her Halloween party, which she themed "Freak Show," she wore the sparkliest wig possible along with a skeleton bustier.

Halle Berry as a witch

Witches are classic Halloween costumes for a reason. Berry posted her take on the holiday staple outfit with a funny caption. "When Spider Witch becomes Spider B*tch at midnight," she wrote.

Kloss made the picture-perfect Marilyn Monroe in this white halter dress.

Kourtney and Kim Kardashian as Madonna and Michael Jackson

The sisters went all out as Madonna and Michael Jackson from the 1991 Academy Awards.

The pregnant star used her baby bump as the best accessory in this Juno costume.

Jennifer Garner as a cat

Garner went as an adorable kitty—and made sure she fit some cat naps into her day of celebrating.

Bruce Willis and Stephen J. Eads as The Shining twins

The actor and his filmmaker friend won Halloween as the creepy twins from The Shining.

The Frozen star hilariously dressed up as Queen Elsa (rather than her character, Princess Anna) for Halloween. "When your daughter demands you BOTH be ELSA for Halloween...you GRIN AND FORKING BEAR IT," she joked.

Gwyneth Paltrow as her Seven character

Paltrow found a very appropriate costume for Halloween: She went as her character from the terrifying film Seven.

Sara Sampaio as a victim of bad plastic surgery

The model went spooky this Halloween, going as a plastic surgery patient gone wrong. "I'll give you guys my surgeon contact!! He's the best!!" she joked.

Behati Prinsloo as a skeleton

The expectant star covered up in a skeleton costume.

The singer positively nailed it in this purple jumpsuit!

We're not really sure what Emrata is dressed up as, but it works. Purple wig + pasties + an ASOS fishnet bodysuit = instant Halloween win.

Adele as a glamorous jester

The Internet is freaking out about Adele's golden clown costume, and we are too, tbh.

The whole Crawford-Gerber family got decked out in '70s garb for the Casamigos party and we are here for it. Kudos to Kaia for the glittery halter top and miniskirt combo.

The dynamic duo stunned in sparkle at the Casamigos Halloween party on Friday. And Amal, that hair though!

Kim Kardashian as Cher and Jonathan Cheban as Sonny Bono

Kim's Cher look was so spot-on that Cher even reacted. "You Look BEAUTIFUL Little Armenian Sister" the icon tweeted. Her buddy Cheban as Sonny Bono was of course her best accessory.

Ariel Winter as a Spooky Skeleton

Ariel Winter made spooky sexy as only she can in this barely-there skeleton outfit, which she wore to Just Jared's annual Halloween bash.

The Live with Kelly and Ryan co-hosts channeled their best game (of thrones) faces while decked out for their Halloween special.

Jaime King and Her Family as Power Rangers

King, husband Kyle Newman, and sons sons James Knight Newman (4) and Leo Thames Newman (2) found the perfect seasonal family costume, but they weren't the only ones. Check out other fabulous family costumes here.

Beetlejuice is a Halloween classic, and so is Winona Ryder's character Lydia, who fends off Beetlejuice admirably. A Beetlejuice costume is truly the perfect mix of kooky and spooky, just don't say his name three tim—oh shoot.

After totally killing it as a unicorn for Halloween last year, Dewan Tatum followed up with a nature fairy look for a preschool Halloween carnival.

Vanessa Hudgens as a witch from The Craft

If you haven't been able to tell by Hudgens's spook-filled Instagram, she really loves Halloween. So what better way to show it than with a perfectly witch-worthy costume from the cult classic The Craft?

Channing Tatum as a unicorn

Following his wife's lead from last year, Tatum donned a purple (and rainbow) unicorn costume and looked quite fabulous.

Jason Derulo as the Night King

We have a feeling Game of Thrones costumes will be extra popular this year. Just ask Derulo.

Geller went for full-on glitter this Halloween, though she didn't have any one particular costume in mind. "Am I a unicorn? Am I a mermaid? Am I part showgirl?!? Whatever I am, I'm ready to support my favorite charity @goodplusfdn (a non-profit providing goods and services to families in need)," she wrote on Instagram. "Oh yeah, and I love Halloween." 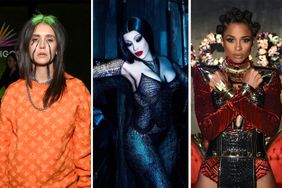 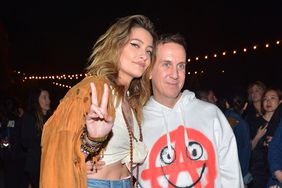