Gwyneth Paltrow's daughter is aware of her mom's most eyebrow-raising goop ventures — and she's clearly here for the joke.

On Tuesday, Paltrow shared a photo of a joke "to-do list" her 15-year-old daughter wrote for her, which read, "Make more vagina eggs and candles."

"Apples interpretation of my to-do list #quaranteen," she captioned the photo.

Also legible on the page were the words "finite only barely enough" and "scarcity model," so it seems safe to say Paltrow's business acumen is catching on with her daughter.

The list, of course, refers to goop's famous jade eggs and the company's latest viral venture, a candle named "This Smells Like My Vagina." Earlier this year, Paltrow explained the candle's name, telling late-night host Seth Meyers, "It sort of started with a joke... I smelled this beautiful thing and I said 'this smells like my vagina'!"

"I was kidding, obviously," she continued. "And we were on mushrooms – no, we weren't, we weren't – but it became a thing that was really funny to us, but also a little bit punk rock. I think women, a lot of us, have grown up feeling certain degrees of shame around our bodies or whatever. So this is a little bit of a subversive candle for all of us out there."

Paltrow, who shares Apple and 14-year-old Moses with ex-husband Chris Martin, recently shared a rare selfie with both her children as they self-isolated together.

Earlier this year, Paltrow said Apple finds her "mortifying," adding, "If I do anything in public, past just not talking and standing still, she’s like [mouths] ‘Oh my God stop!'"

Mortified or not, Apple has a great sense of humor. 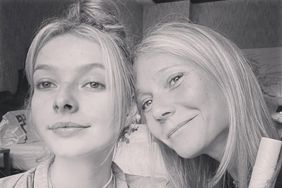