Just a few weeks after Blake Shelton let everyone know that he was using quarantine as a chance to grow out his beloved mullet — thanks to some help from girlfriend Gwen Stefani and inspiration from Tiger King's Joe Exotic — the country crooner has changed things up again. In a remote interview with pal Jimmy Fallon for The Tonight Show, Stefani interrupted with an impromptu haircut. Bye, mullet. Hello, initials. Yes, like a '90s basketball player, Shelton's sporting buzzed initials, but they're not his own.

During the segment explained that Stefani had already planned to give him a new quarantine cut. "This interview — I wanted to do it, but we actually have a schedule that we already had lined up for today and I don’t think we can put it off any longer," Shelton said. He reminded everyone that he originally wanted his flow to be "a symbol of hope," so Stefani didn't touch much of the length, but she did manage to clean up his sides and etch a tribute to their favorite late-night host.

"How’s the mullet? Is it long enough?" Shelton asked.

"Not long enough, man, you can get it longer. But it’' getting close. I like those sides coming off," Fallon responded. And about those sides, he had a clear vision of what he wanted.

After Fallon suggested a "J" and "F," Stefani was more than happy to oblige, buzzing the two letters into the sides of Shelton's head, eliciting giggles from Fallon and disbelief from Shelton.

Why Gwen Stefani and Blake Shelton Aren't Married Yet

Stefani added that it was an honor to coif "the all-time greatest country star," but her laughing seemed to belie that statement. Celebrities: they're going crazy in quarantine, too. Thanks to this update, fans can expect this to be a regular occurrence from the couple. Maybe next time, Shelton's mullet will be even more glorious. 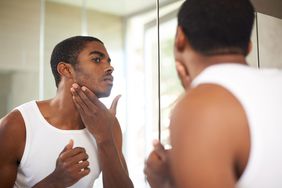