A baby is on the way for Camilla Luddington! The Grey's Anatomy star took to Instagram to announce the news in the most Halloween-perfect way ever.

The actress was poised on a wooden deck with a pumpkin that read, "Baby arriving spring 2017."

"I am SO excited to FINALLY share with you all the news that I've managed to keep secret for what seems like forever now ... I am pregnant!!!," captioned the actress on her latest post. "This girl gets to be a 'cool mom' ha!"

Luddington gushed about her happiness and intends to include her fans on the road to becoming a mother. "We are beyond happy and I cannot wait to bring you all on this journey with me!!!!," she stated. "I'll be posting progress pics as the weeks go on, but for now I figured I'd post this pumpkin because come spring I'll have a belly that size." Daddy duties will be in effect for her boyfriend, actor Matthew Alan.

The actress, who portrays Dr. Jo Wilson on Grey's, also gave props to fans who were questioning if she was pregnant four weeks ago. "And nods of respect to the few of you who guessed right in the past few months," Luddington acknowledged. "Yes, I saw your comments on that Ellen/me video." The clip in question was posted by Grey's Anatomy co-star Ellen Pompeo, with the two actresses on set: decked out in scrubs, sunglasses, lab coats, and Starbucks coffees in tow.

PHOTOS: Every Star Who Is Pregnant Right Now

And Luddington isn't the only Grey's actress who is expecting. Caterina Scorsone (aka Dr. Amelia Shepherd) also has a baby on board, which she revealed with her growing baby bump on the red carpet at ABC's TCA Summer Press Tour back in August. 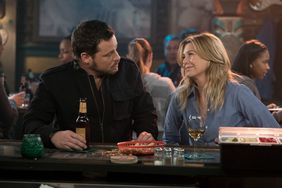