One of the most memorable moments from Sunday’s Golden Globes ceremony was no doubt Natalie Portman’s presentation of the nominees for Best Director.

In the now viral moment, Portman introduces the “all-male nominees,” exacting gasps of disbelief from the crowd at the Beverly Hilton, as well as the millions watching from home.

The Oscar winner is of course calling out the lack of diversity in this year’s category, which included nominees Martin McDonagh (Three Billboards Outside Ebbing, Missouri), Christopher Nolan (Dunkirk), Ridley Scott (All the Money in the World), Steven Spielberg (The Post), and winner Guillermo del Toro (The Shape of Water), and notably snubbed Jordan Peele (Get Out), Greta Gerwig (Lady Bird), Patty Jenkins (Wonder Woman), and Dee Rees (Mudbound).

Gerwig, who co-starred with Portman in Jackie, responded to the actress’s memorable comment, telling The View she hadn’t actually heard it live. “I actually didn't hear her say that until the next day because I was backstage to present,” she explained. “There were so many great films directed by women this year like Dee Rees's Mudbound and Patty Jenkins's Wonder Woman. I really feel that this is going to be the last year that that's true,” she said in reference to the gender disparity.

“I feel like Wonder Woman was huge. It's not just that we should do it because we want women to do it— it’s profitable and it's what people want,” she said. “The proof is in the pudding, and it's just a matter of time.”

Amen, Greta. Hopefully the Academy of Motion Picture Arts and Sciences will not perpetuate the Golden Globes’ gaffe. 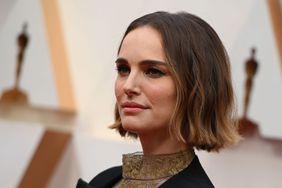