Few compliments are more flattering than being told you resemble the late Princess of Hollywood (and also Monaco) Grace Kelly. That being said, it’s hard to ignore the comparison being drawn between Kelly and her 19-year-old granddaughter Camille Gottlieb.

Camille’s mother is Princess Stéphanie of Monaco, the youngest of the American actress’s three children with Rainier III, Prince of Monaco. Because her mother was not married to her father when she was born, Camille is not included in the line of succession to the country's throne.

Gottlieb’s half-siblings, Louis and Pauline Ducruet, however, occupy the 12th and 13th spots in line—but unlike Camille, they don’t bear a striking resemblance to their grandmother (so win some, lose some?) .

VIDEO: You Won't Believe How Much These Celebrities Look Alike

Anyway, Camille seems to have magically transformed into her glamorous grandmother’s doppelgänger overnight, as HuffPost discovered via Instagram.

When you look *that* much like Grace Kelly—and also she’s your grandmother and you get to tell everyone (that’s some icebreaker!)—it's only a matter of time before Hollywood comes knocking. 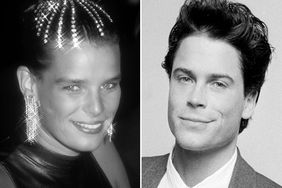 Rob Lowe Moved in with Princess Stephanie After One Night Together