Who is Gossip Girl? Now that the series finale countdown has begun, we’re getting closer to finding out the answer. Even the voice behind the mystery blogger—Kristen Bell—wouldn’t tell us who it was, though she did say she’ll miss her gig once it wraps for good. “It’s been such an easy, fun, cool job,” the actress told InStyle.com at the premiere of Target’s shoppable video “Falling for You,” in which she also stars (watch it here). “Those are the best words to describe it because there is very little work involved for me. I see the episodes in advance. I go in my pajamas. The only better job on the planet is if someone were paying me to sleep!” And, like many of the show’s devoted fans, she’ll be sad to see it go. “I’ve done it for six years, so it will be a nice hole in my heart,” she said. Ours, too! In the meantime, the guessing for GG continues. Scroll down to find out who the cast thinks it is, and catch an all-new episode of Gossip Girl tonight 8/7c on The CW.

Plus, see all of the fashion looks from every season of Gossip Girl! 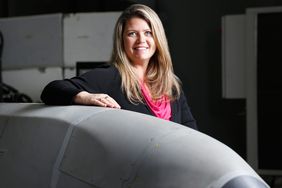