There will be one reigning color on the Golden Globes red carpet tonight, as many actors wear black in a show of unity amid Hollywood's sweeping revelations of sexual misconduct. But for the stylists tasked with dressing them, it's been a competitive race to secure the best noir looks for their clients on short notice.

"At this point, we're all stepping up to support this cause. We all think it was necessary and beautiful," one A-List stylist dressing multiple nominees for the awards show told InStyle anonymously yesterday. But, he said, "I have nothing finalized today, to give you an idea of the stress I'm under."

Last-minute dress changes are business as usual for any awards show, he said—"You can have a dress for months, and your client changes her mind the day before"—but the unofficial dress code is an added challenge. "We're all kind of vying for the same black dresses, to get as many options as possible to make our clients still feel special and stand out in a sea of black."

He began to hear murmurs about the protest last month, at the the British Fashion Awards on December 4. But it wasn't until last week, with the announcement of the anti-harassment initiative Time's Up, backed by hundreds of actresses, that those murmurs were confirmed.

While stylists spent the weekend competing for gowns, designers remade colorful custom dresses in black or started from scratch. "For brands whose collections don't [include] tons of black dresses, it definitely is a challenge," said designer Christian Siriano. "We did one finished piece that was in a bright fuchsia that we completed and had to change." Luckily, though, black is an already-popular palette choice, he pointed out.

The fact that black gowns are in such high demand is testament to Hollywood's commitment to this movement, said Siriano, which ultimately has the fashion community more excited than stressed. "I think it's amazing and will be a beautiful visual. All the actresses I'm working with, they still want to be them. They still want to be exciting, glamorous, but just in this solidarity way, where they'll all making one powerful statement." Besides, he said, confirming that this evening's attire presents only a slight aberration from the usual awards show time crunch, "I think we're sort of all used to it by now."

All but one of Siriano's clients will be attending the ceremony in head-to-toe black. "I have one nominated actress who is not wearing full black. It has black, but it also has a lot of color, and she, I think, will be very boisterous about her opinions on the the day," the designer said. "It's still a black dress, but it also has her personality. It's first Golden Globes and her first nomination and she wanted to wear what she loves, and she loves color."

It remains to be seen what kind of reaction colorful gowns will garner tonight. Speaking to InStyle last week, director Lena Waithe pointed out that, in the spirit of inclusivity, those who choose not to join the "black out" should not be shamed. “It doesn’t mean that we should attack that person or we’re against them," she said, adding, "But for me this is a choice that I have to make." 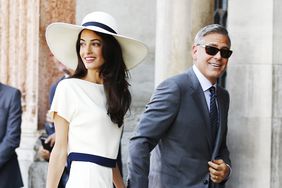