InStyle went backstage with all of the big winners at the Golden Globes! Best Supporting Actor winner Christoph Waltz took home the trophy for his stirring turn in Quentin Tarantino's Django Unchained, and told InStyle.com he can't wait to stash his award next to his other Golden Globe, which he received three years ago for Inglorious Basterds . "It sounds so ridiculous, but I put it with the other one," Waltz said of his awards. "It’s in a cupboard, in a wardrobe, you know, behind closed doors. You can’t look at your awards all the time. Once in a while, maybe twice a month, I need to get into that wardrobe and then I see them." And what went through Best Actress winner Jennifer Lawrence's mind when her name was called? Pure joy! "I got to go on the stage!" she told InStyle.com. See more stars backstage and what they had to say about their new statues in the gallery!

Why Melanie Griffith and Don Johnson Married Each Other Twice
Miss Golden Globe 2016, Corinne Foxx, on Her Unforgettable Night: "All the Presenters Were So Nice to Me" 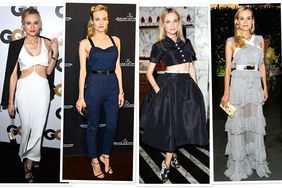