Broadway is getting a dose of Latin flavor when the new musical On Your Feet! opens this week at the Marquis Theatre in New York. The show tells the story of how Gloria and Emilio Estefan went from two Cuban immigrants in Miami to the biggest couple in Latin music in the world. Ana Villafañe makes her Broadway debut playing the Miami Sound Machine superstar Gloria, and Josh Segarra nails Emilio’s signature charm and humor as the visionary producer and manager. Their narrative—told through their most famous chart-topping songs, including “Rhythm Is Gonna Get You” and “Turn the Beat Around”—focuses on her career’s most important milestones up until 1991, from “Conga” crossing over into the mass market to her life-altering accident that landed her in the hospital at the height of her career.

Several weeks ago, when the show was still rehearsing, we sat down with Gloria Estefan at the theater to learn more about her newest project for the December issue of InStyle, on newsstands next Friday, Nov. 13. “This is really a love story between Emilio and myself, and how music got us through some really tough times,” she told us. “But more than that, it’s a story about perseverance, and when you believe in something, finding a way to make it happen.” Scroll down to find out why it’s different from anything else you’ll see on Broadway straight from Gloria herself.

You've made it to Broadway! Why is right now the moment for you to make a show about your life?
Well, we’ve lived a life! We’ve definitely developed a story that people would be interested in seeing. It’s also a great moment because immigrants are getting bashed so much that this offers something positive about immigrants in the mecca of New York, America. It’s one of the best cities in the U.S. to tell a success story of Latinos and Hispanics.

You can feel that feeling in the theatre. The crowd erupted when Emilio tells off a record executive and says, “This is what an American looks like.”
I love that. We kept alive our culture in our music, and that’s what allowed us to have success. We stood out from everything that was happening at the time. It also allowed for our music to have very much our own sound. We’ve hung on to that. In fact, there are four members of Miami Sound Machine who play in the band at the show. It really is authentic.

What Ana Villafane Really Thinks of Playing Gloria Estefan in New Broadway Musical, On Your Feet

The story shows the strength of family, particularly how you’re so close with your mother, grandmother, and sister.
I love how there are very strong women roles. For Hispanics, extended family is crucial. Sometimes, in American culture, people stop listening to any opinion you have the older you get. For our culture, there’s a lot of wisdom in our grandparents and our great grandparents and they are very much a part of our life. In the show, my grandmother is a catalyst for everything that happens.

She's also funny. She gets some of the biggest laughs in the show.
She does! She made it happen for me. She made my Emilio meeting happen and supported me the most. She was my biggest inspiration and the person that really told me to share my talent. I kept telling her I was too shy, and she would tell me that this is landing in my lap and she hoped I was smart enough to recognize it and say yes because this is what I was meant to do. It took me years to get comfortable on stage, but I did it.

Obviously, the music is so upbeat and joyful. What are your favorite songs in the musical?
I have two. “Conga” is a blast when it happens in the show. That is a song that I will be doing the rest of my life and I am happy to do it. There is also a song called “If I Never Got to Tell You,” which I wrote with my daughter, Emily. She is never featured as a character in the play because the musical stops at 1991 and she was born in 1994. But she wrote it with me, and it’s a pivotal moment. It’s the song my mother and Emilio sang to me when I’m in the hospital after I broke my back in an accident. You can hear a pin drop when they sing it. It still blows my mind.

11 Times Gloria Estefan Showed Off Her Love of Pups

Aside from your family, your marriage is clearly on display in the musical, through good and bad, but mostly good. It's inspiring how you two are still so in sync after over 35 years.
Let me tell you, Emilio is an amazing guy. He is very funny and keeps me laughing. He makes everything easy for me. I take care of him and he takes care of me. We are a balance, we are very different, but basically priorities and values are very much the same. We rarely differ on business decisions or music or what is of most important in our lives. It’s always family first.

So what’s the secret to a marriage as happy as yours?
If you ask Emilio, he says to ‘say yes to everything your wife says.’ It’s bull. [Laughs.] The first thing is to be really in love, which we were—and are still—with each other. And then once you decide you are going to partner with somebody, you really have to partner. It cannot be just you anymore. It has to be the two of you. And it is always about that for us. Even when he was producing other very sexy women like Jennifer Lopez and Madonna. Even when he was producing people that knocked me out of the number one position! I was so excited for him because that was his thing and there were no egos.

Like your music, there are so many positive messages in the show. Was that one of your goals?
We’re always hoping would listen to our music and feel empowered, besides having fun and dancing. What we hope that Broadway audiences take away is that they leave feeling that there’s nothing that they can’t do. And don’t wait for other people to make it happen. Find a way to make it happen. If it’s something you want stick to it, persevere. If we can move someone to think a little differently, give them a new idea, or possibly have them leave the theatre feeling something they didn’t feel when they came in, then that is the best thing we can possibly do.

You are so grounded. How do you do it?
I always remember that everybody is a person. The minute you think that you are better than someone else or that you somehow have this unique thing, that goes away. We are lucky as hell to live our lives doing what we love to do and to be in music. It keeps you young; it keeps you happy. How much more fortunate can we be?

Find tickets for On Your Feet! at onyourfeetmusical.com. 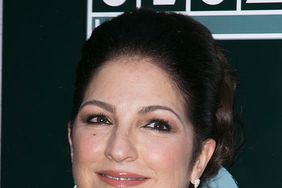