The Havanese is formally known as Sir Pippen of Beanfield, and he's a star.

Acclaimed actress Glenn Close, 71, is a true national treasure. From making red carpet sunglasses a #mood to just slaying in every role she’s ever played (and never getting the Academy recognition she deserves!), the Wife star meets our definition of a Hollywood Queen. But where’s her king? Dining on the finest wet food this world has to offer, probably.

Glenn’s “only son” Pip Close the Havanese (formally Sir Pippin of Beanfield), is the luckiest pooch in the world. Or at least, the West Village.

The spry pup threw his bone in the Instagram ring in late 2015 (three years before his mom got an account of her own) and he’s been documenting his glamorous travels and frequent naps ever since.

Sir Pippin’s social media presence strikes the perfect balance between perpetual humble brag and true insight into the tiring lifestyles of the rich and famous. Sure, Pip gets to soak up the sunshine on Sunset Boulevard and dive into the snow at Sundance, but he’s also constantly curled up in his carrier on lengthy plane ride after plane ride, and forcing himself into uncomfortable clothing to pose for all his fans.

Does Beyoncé Have a Secret Archive of Celebrity Throwback Photos?

But industry grievances aside, it’s good to be Pip — he gets special treatment at all of mom’s shows and events, and even has a personal trainer to keep him looking his trimmest self:

Being a celebrity dog, sometimes Pip can’t fight his natural inclination toward vanity. He loves a good glamour shot, when he can get it.

With a recent visit to The View in the books, Pip’s star continues to rise. Perhaps Mama Close will boost Pip’s social media presence once more by taking him as her date to the Oscars next week? As far as we know, it’s a no-dogs event, but how can they refuse someone who looks so good in a bowtie? 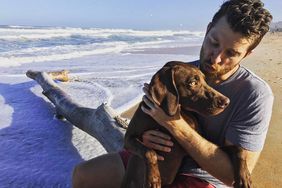