Gigi Hadid Made Her Relationship With Zayn Malik Instagram Official

And might have revealed when they got back together.

After weeks of speculation, Gigi Hadid and Zayn Malik have made their relationship Instagram official once again.

On Valentine's Day, Hadid joined dozens of other celebs feeling the holiday love by sharing a photo of Malik on her photography Instagram account. In the caption is where things got really cute when Hadid wrote, "HEY VALENTINE Z on the farm," She also dated the photo back to December 2019. Interesting.

While Hadid and Malik were spotted out together last month after breaking up in January of 2019, neither have publicly commented on their relationship. This post, however, is as good a public statement as any.

Last month, the two were photographed out together the night before his 27th birthday, walking arm-in-arm.

Prior to that, Hadid stoked rumors of their reunion when she shared an Instagram story, implying she was either cooking with Malik's mother or just using her recipe — leading fans to think the two could be back together again. Hadid had previously been dating Bachelorette alum Tyler Cameron, but that ended in October.

This latest Instagram, at least, does seem to suggest she and Malik were definitely back together by December. 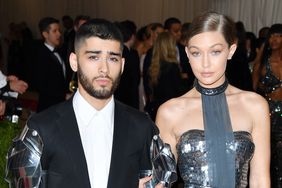