Gigi Hadid made a big announcement regarding her health during a panel discussion with Reebok as part of their #NeverPerfect campaign Wednesday. The model, who was joined by Ruby Rose, Aly Raisman, Zoë Kravitz, and Lena Dunham for the event, spoke openly about her social media detox, her career, and her health. As it turns out, the 21-year-old suffers from Hashimoto's disease, a thyroid condition that can result in fatigue and unexplained weight gain, among other things. Because of this, the Victoria's Secret Angel admits she's had a hard time maintaining a normal metabolism.

"My metabolism actually changed like crazy this year," she told the crowd, according to People. "I have Hashimoto's disease. It's a thyroid disease, and it's now been two years since taking the medication for it, so for the VS show I didn't want to lose any more weight, I just want to have muscles in the right place, and if my butt can get a little perkier, then that's good."

Gigi Hadid Wins Model of the Year, Has One of the Most "Emotional Experiences" of Her Life

VIDEO: 10 Times Gigi Hadid Proved She Is a Runway Star

Despite this, the hard-working young lady was recently bestowed with a trophy for International Model of the Year from the British Fashion Council. An honor which she described as "one of the most humbling and emotional experiences of my life."

Keep up the good work Gigi, we can't wait to see what the future holds. 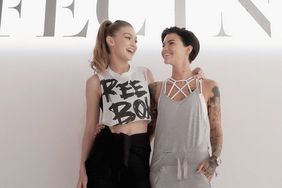