A Timeline of Gigi Hadid's Boyfriends Over The Years

Here's a rundown of the model's past romances.

Like many 20-somethings, Gigi Hadid has had some torrid romances and dramatic breakups over the years. Namely, her on-again-off-again relationship with Zayn Malik.

Before their breakup in October 2021, the supermodel and former One Direction member welcomed their first child together, a daughter named Khai, in September 2020. "She's just so smart, and she's so aware. She watches everything, she's always learning, she's always looking. She's just awesome," Hadid told InStyle in the March 2022 issue.

Here, we take a look back at Hadid's love life before she became a mom.

Hadid and the Australian pop star ended their relationship in May 2015 after dating on and off for about two years. The duo frequently popped on Instagram together and on red carpets, canoodling in their snaps. Simpson went on to tell DuJour that their split was cordial. "I love my ex-girlfriend, I always will. It was an amicable, mutual decision, and we still talk every now and then, but the highly publicized thing made me uncomfortable," he said. "Going out to dinner and there being all this paparazzi and stuff... As soon as we split I had the realization that I was straying away from who I was as a whole person. I want to keep it low-key and focus on my music."

When Hadid popped up at the Monaco Grand Prix with Hamilton and he was snapped with his arm around her waist, rumors started flying that the two were an item. She also sat with him at the Cinema Against AIDS gala for amfAR (above) and posted an Instagram pic with him. She wrote in the caption: "We love you @lewishamilton. Everyone knows you da champ. #TEAMLH."

It was a brief romance, but it happened. Back in 2015, the duo dated for about five months before they called it quits in November of that year. During their relationship, Cara Delevingne gave them the nickname G.I. Joe, even posting an Instagram snap of Hadid and Jonas with the caption, "Introducing G.I. Joe." Hadid went on to playfully embrace the moniker when she stepped out in L.A. with him wearing a white tee emblazoned with "G.I."

Not long after Jonas and Hadid ended their relationship, the model started dating Malik, which he confirmed via Instagram that December. They weren't shy about going public with their relationship (remember their red carpet debut at the Met Gala in 2016?), but it didn't come without its struggles. After seven months of dating, they reportedly broke up—but got back together quickly. From there, they became a red carpet couple fave and were even rumored to be engaged.

In July 2019, rumors started circulating that Hadid and Bachelorette star and fellow model Tyler Cameron were dating. Sources told E! that "they are both taking things slow but have both made it clear they are interested in each other." In the months following, they were spotted hanging out at various places, including an upstate New York Starbucks. But, just a few months into the whirlwind romance things seemed to be over in October 2019. A source told Us Weekly, "Tyler is single... He and Gigi Hadid are no longer together."

In December 2019, rumors started circulating that Hadid had rekindled her years-long romance with Malik and by April 2020, the pair announced they were expecting. Their daughter Khai was born in September 2020 and the pair even sparked marriage rumors in March 2021. However, following an incident with Hadid's mom, Yolanda Hadid, the pair officially called it quits in October 2021, deciding instead to focus on co-parenting. 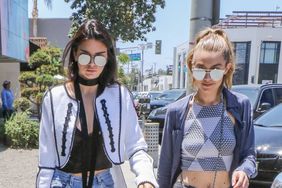