Tonight, Gigi Hadid's catwalking dreams are finally coming true. After breaking the news on Instagram that she would be joining the Angels on the runway at the 2015 Victoria's Secret Fashion Show, the big moment has finally arrived. We chatted with the 20-year-old supermodel backstage before the big show on Tuesday afternoon in New York City. "I found out I made it into the show during my casting," she told InStyle. "So, I was really excited. It was very overwhelming but I just broke down into tears because I’ve been watching this show my whole life and obviously I wasn’t expecting to find out there. So when they told me I was really overwhelmed."

But just because she's an absolute pro at walking down the runway doesn't mean the star doesn't have a plan intact to keep her cool tonight when she struts her stuff.

Here's How the Victoria's Secret Angels #TrainLikeAnAngel for the VS Show

How are you mentally preparing for your walk down the catwalk tonight?
I listened to Disney music when I woke up, just to calm myself down. It’s really fun, just whatever calms you I feel like is the best. So that’s what I do. I think just like visualizing is really good. I kind of learned that in volleyball, like visualizing your great plays and I kind of take that to the runway! Also, just visualizing what you’re going to do at the end of the runway and who’s on the runway with you and how you’re going to interact with them and just kind of thinking about works for me, so it’s kind of second nature and once you get up there you don’t have to worry about it.

What is the greatest hair and makeup tip that you’ve learned over the years?
My mom’s always been like 'less is more.' She never wore that much makeup and I appreciate that now. I think that’s probably the best advice I've ever gotten.

You’re super into boxing. Tell me about your whole workout routine.
When I first moved to New York I had been previously riding horses competitively and playing volleyball competitively my whole life, so when I moved here not having a sport was really weird for me, and I didn’t just like going to the gym. I wanted to find something that I knew I could improve on everyday and get better at, and feel like I wanted to get there and learn something new. So I started boxing and I love it!

See Gigi's debut on the catwalk during the annual Victoria's Secret Fashion Show, which airs on Tuesday, Dec. 8, at 10 p.m. ET on CBS. And be sure to follow our Snapchat (username: instyle) for even more behind-the-scenes access to this and other events! 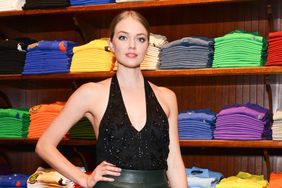