Get to Know Foxes, The Face of H&M Loves Music's Fall Campaign

Grammy award winner Louisa Rose Allen, also known as Foxes, is the face of H&M Loves Music's fall 2015 campaign. Her song "Clarity" with Zedd put her on the map, but she's ready to stand alone in the spotlight. Not only is the 26-year-old representing a top retailer, her second album, titled All I Need—which includes latest hit single "Body Talk"—drops in February. With so much going on, InStyle finally got a hold of the British artist on the phone after the worldwide release of her H&M collection last month. "There's not a clear formula for my style and music," she said. "Sometimes I feel as if the songs are little things given to me." Here's what else you need to know:

She has never let another artist influence her.
Back in 2013, Zedd listened to Foxes' music and asked her to collaborate via email. "It was great working with him because he knew exactly what he wanted," she said. "Plus he's the sweetest guy ever so that helped." At the same time, "It was quite challenging to not make a massive EDM track after 'Clarity,' but I knew I needed to do my own thing." Differentiating herself from other artists made it easier to create her second album. "I already knew what I wanted to say. When I was with other musicians, I was writing for myself as well," she shared. All I Need features Bastille's lead singer, Dan Smith, and completely represents her experimental pop style of music. "It's the album I've always wanted to release," she added.

She's pumped about her H&M deal.
The collection is a playful mix of boy meets girl featuring grunge-inspired essentials. From lace tops to the perfect bomber jacket, Foxes' carefree personality brought the clothes to life effortlessly. "It was a good team because I'd definitely be wearing the clothes anyway," she said. Her favorite piece is the mustard yellow dress (above). "I like that dress a lot. It's fun and easy to wear," she shared.

She out-Googles foxes (as in the animal).
Out of the 34 million-plus search results that you get when you Google "foxes," the singer comes up as the first one on the first page. (Actually, it's her Facebook page, which has 1,381,928 likes.) "That's been the mission since the beginning, I needed to out-Google an actual fox," she jokingly said. She got her nickname from a song she wrote when she was younger named "Like Foxes Do." Then, she said her mom had a dream about foxes making beautiful noises and it reminded her of Foxes' music. "I had to go with it then because my mom's always right," she said.

Fall Out Boy likes to put her in the driver's seat.
She's also featured on Fall Out Boy's song "Just One Yesterday." While filming the music video, the band members asked her to drive for one of the scenes. "I can't drive!" she confessed. "Squished in the back of a van, I had to take them upwards a park. It was fun, but luckily they're all still here."

She can create a mood.
With New York, London, Milan and Paris fashion shows coming up soon, we asked the fashion-lover to make a playlist of her own that she'd like to see on the runway. "Here's a good mix of ups and downs," she said. Enjoy!

4 Life Lessons We Learned from Cocktails with Icona Pop
Was this page helpful?
Thanks for your feedback!
Tell us why!
Related Articles 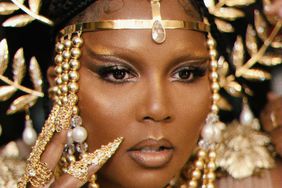