When Emily VanCamp goes to a boxing match, she brings her best quilted mini-bag of course! The Revenge star, whose third season of the hit ABC series premieres September 29, was recently spotted carrying a leather Rebecca Minkoff quilted mini-purse at the MGM Grand Garden Arena for the battle between Floyd Mayweather Jr. and Canelo Alvarez. Mayweather may have won the fight, but this compact purse won our hearts! It features an interlaced chain and leather strap, custom silver hardware, and exclusive black and white lining. Covet her bag as much as we do? You can snag the Mini Affair Diamond Quilt purse for $195 at rebeccaminkoff.com. 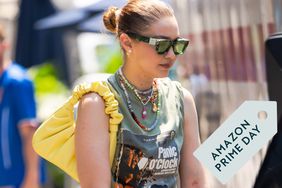