This past summer, FKA Twigs offered Baltimore residents the ultimate experience: to participate in a free dance workshop run by the British songstress herself.

Just a casual invitation from a world-famous musician and dancer, NBD …

Though it began with just a tweet, the session itself evolved into something much greater. About 400 people ended up attending the workshop, and that July afternoon lent itself to the Baltimore Dance Project documentary, available to view through WeTransfer.com.

Rather than hosting her workshop in L.A. or N.Y.C., FKA Twigs chose the Maryland city for its “soul” and “amazing energy.” “I just wanted to see what the truth was, and the truth was very different from what the media had made it out to be,” she shared.

For a preview of the stunning black-and-white dance doc, watch the trailer below. 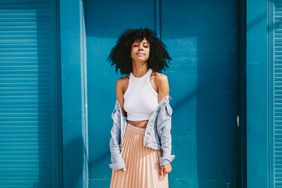