On Wednesday, Entertainment Weekly blessed us with the first-look photos from the movie adaptation of A Wrinkle in Time, and we can’t seem to look away. Disney is turning Madeleine L’Engle’s 1962 novel into a feature film starring Oprah Winfrey, Mindy Kaling, Reese Witherspoon, and Chris Pine, and the first photos will leave you wanting even more.

The plot centers around a young girl named Meg who hops through different universes and dimensions to find her father, a government scientist who has disappeared. While Meg is played by a newbie, 14-year-old Storm Reid, her three “mystical guides” along her journey might look a little familiar: They’re played by Winfrey, Kaling, and Witherspoon. Lucky gal.

Just when you thought you’d seen everything, A Wrinkle in Time gave us Oprah Winfrey in a statement cat-eye, glittery lips, and face jewelry. (If only Winfrey had regularly rocked this look on her talk show!)

Selma director Ava DuVernay is taking on the project after discovering the beloved book as an adult. “I saw so much beauty in it, but also so much meaning. She’s a very radical thinker and she embedded her sense of what society should and could be in this piece, and a lot of it I agree with,” she told EW.

Click through to the gallery to see even more first-look images from the film. 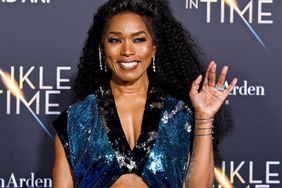