Why Did Fifth Harmony Break Up? We Have the Scoop

Fifth Harmony was formed in 2012 on the reality show, The X Factor, and released their first album in 2015. Their song, "Worth It," was a smash hit for the band — followed by another hit, "Work From Home."

In December of 2016, Camila Cabello announced she was leaving the group to pursue her solo career. Fifth Harmony survived for more than a year with just four members after Cabello left the group, before the remainder of the band announced they were taking a hiatus to pursue solo careers of their own.

Ally Brooke, Normani, Dinah Jane, and Lauren Jauregui announced in May of 2018 that they’ll be splitting up — supposedly just for a period of time — to try to make it on their own in the music business.

"Reflecting on the past six years since we started on X-Factor, we've realized just how far we've come and we appreciate everything so much, more now than ever," they wrote in a statement on social media. "We've really had one hell of a memorable journey together and can't begin to express our gratitude to y'all for coming along with us on this wild ride!"

"After six years going hard, non-stop, we also realized that in order to stay authentic to ourselves and to you, we do need to take some time for now to go on hiatus from Fifth Harmony in order to pursue solo endeavors."

"We are all very excited and grateful to be able to take this time to learn and grow creatively and really find our footing as individuals. In doing this we are allowing ourselves to gain new experiences, strengths and perspectives that we can bring back to our Fifth Harmony family,” they wrote, insinuating that they would, in fact, reunite at one point in the future, though there’s no telling when that could be.

In the statement, they also confirmed that they will perform the remaining shows they have planned together through the end of the year.

All the Best Red Carpet Looks from the 2022 VMAs

What About Camila Cabello?

Cabello, their former fifth member, has seen considerable success as a solo artist. She released three solo albums, with her most recent in 2022 called Familia. Her hits “Havana” and "Never Be the Same" hovered near the top of the charts for quite some time. She has earned three Grammy nominations, five American Music Awards, and four VMA's. She also starred in the adaptation of Cinderella on Amazon. On the personal side, she dated Shawn Mendes for three years before splitting up in 2021.

Perhaps her accomplished transition into the music business as a singer encouraged the other four to follow suit.

For fans who have been following each of these ladies, they have all released their own music.

Jauregui had already released music outside of Fifth Harmony, including tracks with Halsey, Ty Dolla $ign, Marian Hill, and Steve Aoki. Her dubut EP called Prelude was released in 2021. She also appeared in an HBO series called A Tiny Audience.

The same can be said for Ally Brooke, who released her debut single, “Perfect,” in collaboration with Topic back in January 2018. She is also rumored to be working on a Spanish album. She also released a memoir in 2020 called Finding Your Harmony.

Normani signed with Stellar Songs as a songwriter before news of Fifth Harmony’s split and confirmed that she has a solo album on the way. She's already collaborated with Khalid on the song, "Love Lies." She has also collaborated with Megan Thee Stallion and Cardi B — and performed their song "Wild Side" on the 2021 MTV VMAs.

As for Dinah Jane, she initially revealed that she was a bit nervous about writing her own music. “Sometimes when you sing someone else’s song over and over again or songs that have been given to you, you’re afraid to go out there and write one yourself,” she said in an interview with Flaunt earlier this year.

Despite her nerves, Dinah Jane said, “There’s something in me that desires to express myself even more and not be so afraid of a solo endeavor.”

She apparently overcame her nerves, as she released her debut EP called Dinah Jane 1 in 2019. Her tour in 2020 was unfortunately canceled due to the pandemic, however, her career keeps moving in the right direction as she appeared in the Netflix movie The After Party. 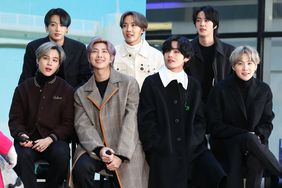 The Members of BTS Are Prepping for Their Mandatory Military Service