When you think of Fifty Shades of Grey (slated to hit a theater near you on Feb. 13), the last thing you would think of is clothes. Or more specifically, the main characters wearing clothes. But steamy X-rated scenes and Jamie Dornan's washboard abs aside, we were riveted by the costumes we saw in the trailers and clips of the movie, from Anastasia Steele's (played by Dakota Johnson) floral button-down to her pretty peach dress. To clue us in on all things Fifty Shades fashion, we went straight to the source—award-winning costume designer Mark Bridges.

Who Is Fifty Shades of Grey Jamie Dornan's Wife?

Before we dive into Bridges's detailed account of Anastasia's looks in the movie, there are two interesting things to note about how the costumes came to fruition. The first being that Bridges didn't read the books. "Fifty Shades is a worldwide phenomenon, and I didn't want the baggage to go with it," he tells InStyle. "So I did something new and just went with the script to tell the story."

The second is that Bridges designed the majority of the costumes himself as opposed to sourcing out designer pieces. That's not to say he eschewed labels altogether in this film or that he'll purposefully exclude them in future installments, but it was a deliberate decision he made to help further the story.

"People are savvy about clothes; they recognize designs from certain collections, and it immediately dates the film. I wanted to make this film timeless," he explains. "I wanted to focus on the story rather than the noise that surrounds designer choices. In subsequent movies, labels, brands, luxury life become more important in the storyline. But this film is about the story and the relationship rather than the fabulousness."

With that said, read on for Bridges's insight on his thinking and reasoning behind five of Anastasia's looks in the film.

When Anastasia meets Christian for the first time

"She's nervous about the interview, so I picked pieces that were obviously bad choices. The blouse has a faded Liberty London print that looks like a thrift piece she's had for a long time, and I felt that in the moment, it was a bad choice—it's her skewed idea of what a grown-up would wear. The whole look gives the impression that she's a kid.

"I paired the blouse with a cardigan and a heavy crepe skirt, tights, and a heavy foot with Fiorentini + Baker boots. She trips on her way in, which makes her clumsy, and again, makes her look like a child. The overall feel is unsophisticated and a little awkward, but still pretty. She's in blues, and the colors play up her eyes. There has to be something under all that that Christian has to find attractive."

When she sits down for a business dinner with Christian

"As the story evolves, her look becomes more sleek and fitted. I think the biggest change is when she comes in for a business dinner with Christian and she says she's going to come in a burlap sack. But instead she's in a dress that's form-fitting with a large zipper in the back. It leverages in her direction, because she looks so fantastic."

When she meets Christian's mother

"[The director] Sam Taylor Johnson loves this peach dress when she goes to dinner and meets Christian's mother. It's inspired by Faye Dunaway in The Thomas Crown Affair, which was also a sexy-cool movie about billionaires and romance. There was a lot of old-school handwork that went into it, with the 25 covered buttons and the delicacy of the fabric. The fit and length were tasteful, but it was still a little naughty for Christian. This was my favorite, too."

When Christian surprises her in Savannah

"I made a green dress for her when she goes to Savannah and Christian surprises her. Dakota wore all of her clothes like a trooper, but I think this one was her favorite. She looked so tiny and pretty."

"There were certain looks written in the book, like Christian's jeans, that were expected to be fulfilled in the movie. The gray chiffon dress she wore to her graduation was one that Erika [ Fifty Shades author E.L. James] felt that her audience would want to see." 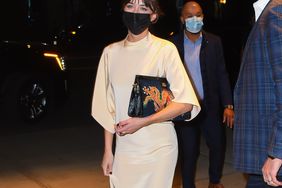