British crooner Estelle is no stranger to the Grammys! The star was nominated (and won!) in 2009 for her song with Kanye West, "American Boy," which took home the gilded gramophone as Best Rap/Sung Collaboration of the Year. (That year, she had two outfits, both revealing that the singer was in a very metallic mood.) She's nominated again this year—this time, for Best R&B Performance for her song "Thank You"—and it turns out she already has big plans for her dress. "I’m really thinking of tailoring something," Estelle told InStyle.com at Russell Simmons’s Diamond Empowerment Fund GOOD Awards in New York. "I’m just thinking I want to do something different, something that will honor my heritage more than just wearing any designer. So we’ll see." Estelle also revealed that tailoring her own clothes is something she does often. So where does she get her inspiration? "I dream up things!," she said. Tune in to CBS Sunday, February 10 at 8/7 c to see what she concocted!

Plus, see the rest of this year's nominees! 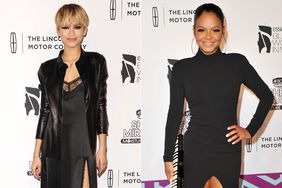