Fashion Week was in a dark mood on Tuesday.

No wait, that’s not quite fair.

The morning started with back-to-back shows that paid tribute to Morocco. Tory Burch’s Marrakesh-meets-Chelsea collection was a delightful affair, from the runway and walls covered with threadbare rugs to the clothes that matched her magic carpet ride (pictured, above). Hers was a rich study of lively clothes that read both elegant and more than a little bohemian, the sort of things the 1960s style icon Talitha Getty might wear had she given up heroin. Baja East, the newish luxury comfort line by Scott Studenberg and John Targon, was also “reminiscent of a market bazaar,” according to the designers, meaning clothes for rich hippies. Who would wear a cashmere intarsia sweater that read “Baja Babe” or “Junk in the Trunk” unless they were in on the joke?

And the night ended with a late supper at Indochine, where the retail wizards of Net-a-Porter had gathered designers including Burch, Aerin Lauder, Carol Lim, Paul Andrew, Tamara Mellon, Eddie Borgo, and more.

But in between, everything seemed black. Black like Vera Wang’s collection of almost entirely black clothes—haunting, in their sparse uniform shapes, like the clothes of chic waiters, or maybe those of disgruntled celebrities forced to march along yet another red carpet. I particularly liked her black ballgown skirt that was fused with the top of a pair of men’s trousers, a genderless hybrid that left room for a wallet (pictured, above). Diesel Black Gold, designed by Andreas Melbostad, too, lived up to at least part of its name, with deeply black biker jackets and grommet dresses, void of decoration beyond the occasional flash of a lacy black slip peeking out from underneath (pictured, below).

Kendall Jenner Runs With the Vera Wang Gang at #NYFW

The moment everyone was most anxious to see was Peter Copping’s debut at Oscar de la Renta, where the former Nina Ricci designer took over for the late master of American elegance. Copping was respectful, a gentleman who lived up to the standard Oscar would have expected with proper day suits in stretch bouclé and furs that were at the same time decadent (a black and white mink skirt made to look like patchwork jaguar, for instance, pictured below left) and polite. His evening dresses were more lively, with big flowers (pictured, below right), a current red carpet trend, and a color-block ballgown in a fabric described as “duchessina.” There were many black looks, as with the rest of the collection, and his color choices were largely rendered in darker tones.

Before the show, the company released several short clips showing Copping at work, sketching his dresses, and it struck me watching his runway that the results were very much like that—sketches of the idea of de la Renta—full in the hips with a patrician posture. If there was one indication that the show was a positive first step, it was this. Sitting in the front row, Oscar’s widow, Annette de la Renta, who sat with Mercedes Bass, Barbara Walters, and Nancy Kissinger, greeted the finale with a broad smile. 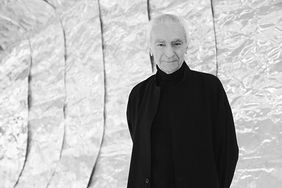 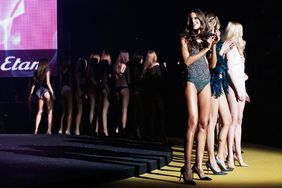