Fashion needs to get something off its chest. And by that, I mean its shirt.

As the four-week collections circus moves on to its final stop in Paris, two designers really went there with the topless look. First was Simon Porte Jacquemus, whose extra-avant-garde label Jacquemus is a semi-finalist in the LVMH Prize for emerging designers again this year. In his show, he included several half naked models -- one wore pants that looked intentionally rudimentary, like they were made for life-size paper cut-out dolls, and a mask on her face, a small gesture which I’m sure her mother will appreciate.

Then Cristophe Lemaire, the former Hermès designer who rechristened his signature label Lemaire this season, showed a handbag in the shape of molded female torso with breasts, in addition to his usual fine luxury wear for urban nomads (pictured, below). Certainly there was a link to modern art there in the tradition of Louis Bourgeois and Henry Moore, but I’m not sure that either are likely to become Lemaire’s answer for an It bag, or if this is even a message that male designers should be proposing in the first place.

Cédric Charlier’s collection had a minimalist sportif vibe, with rugby stripes rendered in sequins on mini dresses, and precisely pleated cheerleader skirts (pictured, below). And at Rochas, designer Alessandro Dell’Acqua toasted the house’s 90th anniversary with brown and gray dresses with thin bow collars and a flash of yellow coat here and there to liven things up. But mostly, the shows on Tuesday and Wednesday represented a fairly tentative start to Paris Fashion Week.

Until, that is, Dries Van Noten (pictured, top), in exceptionally great form, presented a collection that reminded the audience that fashion does not have to be about noise or flash to succeed, but can do so through the power of individuality. As the lights went down – literally descending about 10 feet over his runway until the photographers screamed in fear of being crushed – the music went up. Or rather, the sounds of strong female voices of different genres, singing without music but songs so familiar and distinctive as to be immediately recognizable. Before I describe the collection, here is the list of songs that were played (some were repeated):

PHOTOS: See All the Stars Sitting Front Row at the 2015 Shows

What these songs had in common, besides being performed by female artists, is that they spoke of the power of being a woman – “I’m all I wanna be,” in the words of Courtney Love. It is rare enough that a designer here understands women, let alone celebrates them, and Van Noten, in this collection, offered clothes that were versatile and fabulous and practical all at the same time – prints and volume done right, a black crepe midi skirt with red embroidered flowers, tie-on ball skirts, shiny khaki palazzo pants, a superb trench with a Chinese red floral print overlay, a sweatshirt with dangling iridescent paillettes, shaggy rope coats, I could go on and on. The pieces were as strong apart as they were together. It was was a message for independent women. As Beyoncé says in that song, “I depend on me.”

PHOTOS: Get Our Designer Pronunciation Guide 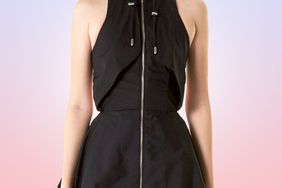 How One French Jeweler Shares Her Personality Through Wardrobe Choices 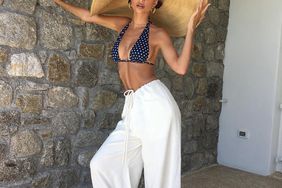 I Want This Absurd $431 Hat, But It's Sold Out Everywhere