Monday at Fashion Week was a big day for New York’s megabrand sportswear and ready-to-wear designers, with major shows from Carolina Herrera, Tommy Hilfiger, and -- celebrating her 30th anniversary in business -- Donna Karan, the creator of a simple system of wardrobe essentials she once called “seven easy pieces.” Judging by her collection, shown on Wall Street at the end of a long day, Karan was less interested in reminiscing about her history than demonstrating that her inventive, mysterious, and provocative streak is still alive and well.

Three models in black body suits and nipped-waist black jackets -- worn only with thigh-high heelless black boots that suggested dominatrix but were, in fact, nods to her original Donna Karan designs -- took the runway at the start of the show. Those looks were followed by more Karan originals, like a black furry coat with wisps of white patches, sparkling black dresses with sheer-paneled skirts and several of her signature, seductive backless evening dresses. Looking around fashion these days, it appears that Karan is more influential than ever, given how many times editors have remarked that this or that collection looks like an ode to Donna Karan (think of the draping in the spring Givenchy show by Riccardo Tisci, or even Jason Wu’s sophisticated embroideries for fall that resemble burn-out velvets).

It’s a wonder she doesn’t get caught up in her own nostalgia, but, as the jeweler Robert Lee Morris, her longtime collaborator, pointed out before the show, what drives Karan to continue to design is life in New York. For the anniversary show, he made a bracelet called “empire,” a chunky, cubist assemblage that, from a distance, looked like a city block cast in the golden light of a sunrise.

Herrera, meanwhile, also was in the mood for experimentation, playing with round-shoulder couture shapes and complicated hair buns, some of her dresses appearing to be collages of pyramid prints -- not your garden variety of Seventh Avenue dresses. And Hilfiger went into high-gear après-ski mode, with tartan takes on classic American outerwear – parkas, anoraks, puffers and fleece – that looked inviting on a runway set that included fake snow and a chalet.

MORE:• Back of the Cab Review: InStyle Editors React to Tommy Hilfiger's Fall 2014 Show• A Crowded Calendar Causes Designers to Pull Out All the Stops at NYFW• Runway Looks We Love From DKNY 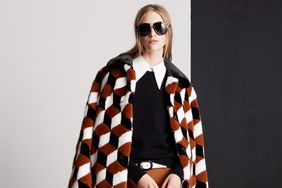 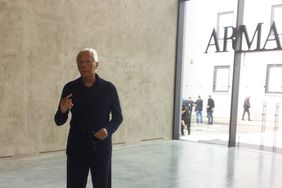