If nautical nonsense be something ye wish, and ye are too old for SpongeBob SquarePants, then Milan Fashion Week is the place to be. Or it least it has been this week with not one, not two, but three, seafaring collections dedicated to the deep blue. First came Fausto Puglisi’s barnacle encrusted collection on Wednesday, then Max Mara started Wednesday’s lineup with a collection called “A Sea Tale.”

It was as straightforward as straightforward can be, with faux-front sailor pants, sweaters knit with stars and stripes, and some mighty nice cashmere suits trimmed with nautical ropes, all set to a fisherman’s lament that included lyrics such as “shaving is better with a rusty razor, early in the morning!” I’ve had that song stuck in my head all day, and thought of it again at the Emilio Pucci show, where the new designer Massimo Giorgetti showed a first full collection (following his pre-spring debut this summer) that looked as if the models had walked right out of the ocean, some wearing shoes that might have still had some kelp attached.

Embroidered patchwork has been a big trend of the season, here seen in sweater dresses that had been appliqued with more seashells, fish, and other exotic ocean creatures. Giorgetti’s new look for Pucci was like a seafood buffet dinner, and the check was signed “Emilio,” as in script that was affixed to the back straps of a few dresses and as an overall lace patterned top, best avoided if you have an allergy to shellfish.

The big news of the day was a superb Fendi collection (pictured, top), split between dark forest green leathers or tiered fur pieces, and a sharp selection of reds on lightly voluminous smocked blouses, bloomer shorts, and romantic peasant tops and dresses. Accessories were topped with 3-D floral appliques for a more textured, lighthearted look.

Prada (pictured, below) was dominated by proper suits, in men’s wear patterns and also brown striped fabrics that had a decisively retro feel, a more polished and subdued collection from the designer Miuccia Prada than we’ve seen in some time. Even the prints were as simple as repeating patterns of parallel lines. The embellishments of imaginary regalia from her powerful fall collection returned, here in jet black crystals, but the one note of typical Prada irony came in the blouses worn underneath these layered looks, printed like children’s pajamas, with cartoons of rocket ships.

Jeremy Scott’s latest adventure for Moschino (pictured, below), capping the night, was yet another wildly imaginative caper, this season with the theme of a construction site, where the “STOP” signs said “SHOP.” Traffic cones were evidently a key inspiration behind evening gowns in neon orange and yellow, and handbags were shaped like hardhats, and, well, traffic cones. Midway through the show, the collection switched to a car wash theme, with bubble machines dousing the audience in soap, and Anna Cleveland wearing a fringed mini dress while turning pirouettes through, well, a car wash. It was all in good fun, you see, and what else would you expect from a designer whose first collection for Moschino in 2014 included a tribute to none other than SpongeBob?

Gucci's Momentum Continues With Alessandro Michele's Eclectic and Intellectual Collection at #MFW
Was this page helpful?
Thanks for your feedback!
Tell us why!
Related Articles 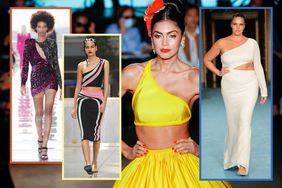