Emma Roberts Will Wait Until the Day of the Golden Globes to Choose Her Dress!

As Hollywood gears up for tomorrow’s big Golden Globe Awards, many stars are putting the finishing touches on the dress they chose months ago—but not Emma Roberts! The recently engaged star is playing red carpet roulette with her gown this year.

“Some of our clients are coming in the day of the Globes so we are going to be deciding that day, stylist Meritt Elliott told InStyle exclusively at Diane von Furstenberg’s star-studded Journey of a Dress exhibition premiere in Los Angeles on Friday night. “We will be accessorizing beforehand, tailoring during hair and makeup and then come up with the entire look that day. It is actually kind of exciting as well.”

With Roberts busy schedule, she’ll be one of the aforementioned stars that will be making a game time decision with her dress. “Emma Roberts is going to wait until the day of Globes because she is in the middle of filming American Horror Story and she is flying in just for the day,” chimed in stylist Emily Current. “It is an opportunity to put your formal wear on and embrace it.”

Dying to see which dress she chooses? So are we! Tune in Sunday, January 12th at 8:00PM ET/5:00PM PT on NBC‎ for the 71st Annual Golden Globe Awards and stay tuned to InStyle as we cover the event live.

Plus, see some of the riskiest looks from past Golden Globe Awards: 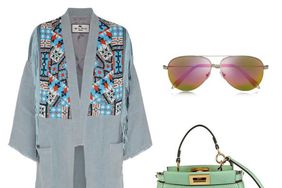