Happy birthday, Intermix! The boutique celebrated its 20th anniversary with a bash at the New Musuem in New York last night, and invited their celebrity fans to come and celebrate. Emma Roberts popped in wearing a piece Ohne Titel designed for the store’s 20th anniversary capsule collection (shop it for $498 at intermixonline.com), while Marisa Tomei rushed over from her latest film project to join the festivities and congratulate founder Khajak Keledjian. “I went 20 years ago, when they first opened,” Tomei (in 69 Denim) told InStyle.com. “To see them flourish like this is wonderful.” The highlight of the night, however, came at the very end, when Solange Knowles—clad in silver leaf-covered orange top and pants by Diane Von Furstenberg—got the crowd to their feet with a five-song set. “Who can show me how they can dance?” she asked the party-goers. Cue the hip shaking! Click to see more. 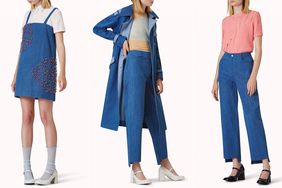