This Is What Emily Ratajkowski Wears to Do Laundry

Emily Ratajkowski finally had a chance to take some time off, and the girl is living it up in Italy.

Her trip seems to have kicked off around June 4, when she posted a selfie of herself doing a totally normal non-super model thing: sipping what appears to be espresso.

Since, she’s celebrated her 26th birthday, taken in picturesque seaside views of the Mediterranean, and worn, by our count, five different swimsuits, not to mention floral pajama-like separates, asymmetrical dresses, and, because it’s summer, crop tops.

But roughly two days ago, Ratajkowski seems to have had a realization we’ve all experienced: “I need clean clothes!” Yes, Emily Ratajkowski may have under packed. The answer to such a woe? Laundry.

The task sounds annoying enough, but, the model took the opportunity to forget about technology and do it the old school way. On Tuesday, she took to Instagram to share one epic photograph of herself hanging up several items of clothing on the balcony of a home overlooking a colorful neighborhood.

“Absolute dream,” she wrote as the caption. The takeaway is not only that Ratajkowski may quite possibly have a deep appreciation for keeping her covetable pieces spotless, but also does it in a bikini.

The last time we did laundry we literally picked everything off the floor and waited for the drier to stop spinning while wearing our last clean pair of underwear. 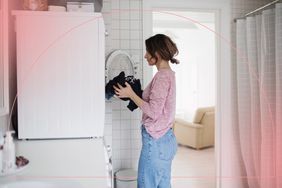 Here's How to Properly Wash Period Underwear, According to a Laundry Expert 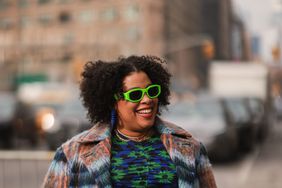