Ten years ago a then 23-year-old Emily Blunt attended her first Hamptons International Film Festival as a "Rising Star." A decade later, she was back at the seaside festival this weekend to accept her acting award for creative impact. With countless films under her belt, including her most recent role in Sicario, a lot has changed for the actress and new mom to almost-two year old daughter Hazel. InStyle caught up with Blunt to talk about acting, the evolution of her style, and the one baby product that has single-handedly changed her life.

The Festival
"I came years ago as one of their 'Ten to Watch' program, so it's really wonderful to be here again getting this established acting award. It's really rewarding to know that I've survived this industry, and have had some sort of staying power to be at this moment in my life, so it's quite nostalgic being back here and realizing how much has happened in my life, and how much I've done in the meantime.

Her Look
"I chose this dress from Russian designer Ulyana Sergeenko (above, left) because she does such feminine pieces. I figured it was perfect for a Hamptons brunch. And I'm wearing a very modern black-and-white J. Mendel dress (above, right) tonight for the awards ceremony, so it's really different. I pick my looks quickly. I've been working with my stylist Jessica Paster for 10 years. She and I work very well together—it's nice to collaborate."

Style Evolution
"I've become a bit more bold with color and print. I was a bit more tentative when I first started out. Now, I love to embrace the spectacle of it, because it is an alien thing and an otherworldly thing to be photographed like that on the red carpet and have people screaming at you, so I might as well make a spectacle of it rather than look like myself."

Life-Changing Baby Gear
"Get a stroller called the the City Mini ($225; amazon.com)! Especially since we're about to spend 7 months in New York City. It's got one handle in the middle of the stroller, and you lift it and hold it and it immediately folds. That is my suggestion for getting out of the house!"

RELATED VIDEO: How to Get Emily Blunt's Perfect Brows 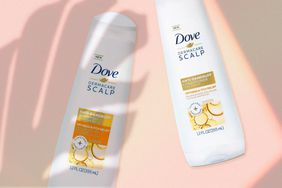