We're honoring the late, great music icon Elvis Presley on what would have been his 81st birthday today. The singer, who was known as "the King of Rock and Roll," put out hit single after hit single during his time in the spotlight. To this day, loyal Elvis fans still sing along to the Mississippi native's greatest No. 1 hits, including "Hound Dog" (1956), "Love Me Tender" (1956), "Jailhouse Rock" (1957), and "Devil in Disguise" (1963)—just to name a few.

Equally known for his music as his dance moves, "the King" gained a reputation for his on-stage "shimmy-shake" and smooth ways with the ladies. Often, he was referred to as a sex symbol during his career, which spanned from 1954 and lasted until he died in 1977 at the age of 42.

Today, Elvis is still considered music royalty and his memory lives on in our rock-and-roll hearts, as well as in his legacy. Keep an eye out for his granddaughter Riley Keough, as she follows in her famous grandad's footsteps this year, starring in The Girlfriend Experience. Happy birthday, Elvis! 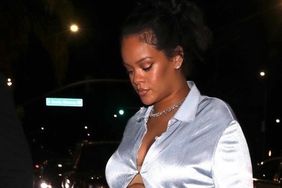 Rihanna Stepped Out for a Late-Night Dinner in Elevated PJs