Ellen DeGeneres and GapKids Are Joining Forces for a Good Cause

Busy is an understatement for Ellen DeGeneres: The talk-show host is currently filming the 12th season of her series, producing an animated series for Netflix, and turning her app into a TV game show. But even that workload isn't slowing the energetic comedian down. What's next on her to-do list? DeGeneres is officially expanding her lifestyle brand, ED, and later this summer will colaborate with GapKids on a clothing line.

The Kate Spade for Gap Kids Collection Couldn't Be More Adorable! Get a First Look Now

The GapKids x ED apparel will be available in store and online Aug. 17, just in time for the back-to-school shopping season. Although the line will focus on offerings for girls, there will be a few options available for boys and adults.

The collection isn't all about the clothes, a Gap representative explained to WWD—it's also a social movement and DeGeneres is hoping to empower young girls to chase their dreams. “Following my passion allowed me to be exactly who I am today—a talk-show host with a vibrant side business as a party mime,” DeGeneres said in a statement.

While the hilarious comedian is a pro at making us laugh, she doesn't play around when it comes to encouraging youth; after all, she led the charge in furthering Sophia Grace and Rosie's careers as TV personalities and singers. Perhaps we'll see the adorable duo in the ad campaigns someday soon. 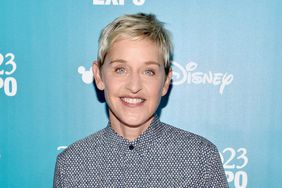