Elle Fanning has been pretty busy these days. She just finished filming the movie Live by Night, co-starring Ben Affleck, Zoe Saldana, and Scott Eastwood; the young actress is also voicing a part in the animated film, Ballerina, coming out on Dec. 14; plus she's playing a starring role in the movie 20th Century Women, which hits theaters on Dec. 21. But clearly, the Maleficent star still makes time for her friends, as she was spotted out in the Studio City neighborhood of Los Angeles on Tuesday, grabbing lunch with some pals.

The 18-year-old graduated from high school this past May, and is clearly ready to fully dive into the movie industry, starring in four more films that are set to be released in 2017.

Elle Fanning Looks Like a Marc Jacobs Princess at the Power of Young Hollywood Party in L.A.

We're so excited for the adorable rising star's upcoming projects, and can't wait to watch her take on some more adult roles. 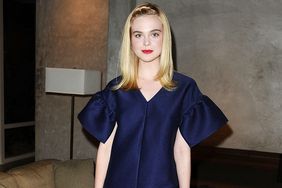 Elle Fanning Rocks a $121 ASOS Jumpsuit at a Dinner in L.A.