Drew Barrymore is putting a romantic spin on the five-second rule!

Hit U.K. show First Dates makes its transition across the pond to the United States and premieres Friday with Ellen DeGeneres and Barrymore at its helm, and the Santa Clarita Diet star stopped by the Ellen DeGeneres Show to promote the new series with a specially date-themed game of the Five Second Rule.

During the segment, the daytime emcee and the 50 First Dates star played a teaser clip for their new reality show, which promises plenty of awkwardness and fun as real people go on first dates. At the end of the evening, the participants decide whether they'd like to go on a second date with the person or go back to the drawing board.

In keeping with the date theme, the mom of two revealed her hilarious excuse for bailing on a bad date (hint: it involves an avalanche) as the pair faced off in a competitive game of the Five Second Rule. While the host started things off on a high note after Twitch asked her to name three places to go on dates, the Ever After star stumbled as she tried to name three date activities in under five seconds.

"Oh no, I suck at this!" Barrymore exclaimed.

Watch the full segment above for some out-of-the-box dating advice.

Drew Barrymore and Her Daughter Frankie Meet the Easter Bunny

Catch the new First Dates when it premieres on NBC on Friday, April 7, at 8 p.m. ET.

A Complete Timeline of Mila Kunis and Ashton Kutcher's Relationship
It's Been 10 Years Since Rebecca Black Released "Friday," and the Internet's No Kinder to Young Girls 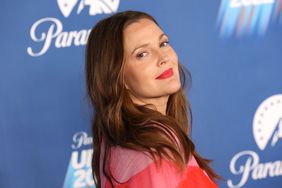