We Finally Have a Picture of Drake's Birkin Collection

Way back in 2017, Drake told The Hollywood Reporter that whoever he ended up marrying had a treat waiting: a stash of Hermès Birkin bags. Apparently, he's been collecting the coveted bags for years with the intention that they'd be a gift for "the woman I end up with." That statement went down in handbag history, but Drake has never given anyone any more details. Which bags? What size? What color? Until now, that is. Thanks to a tour of his Toronto, Canada, compound courtesy of Architectural Digest, we're finally getting a peek at the goods.

Drake Shared the First Public Photos of His Son

In photos of his two-story closet, which, according to AD, is "adorned with amethyst hardware, rock crystal, and seating upholstered in diamond-tufted shearling with polished nickel studs," eagle-eyed fans spotted at least three bags on full display: the classic Birkin in tan crocodile, gold croc, and black and white. But, further inspection revealed even more. The closet's mirrors reveal even more, though they're too small to be easily identified.

Twitter users spotted some gems, literally, noting that one of Drake's bags is the rare Himilaya Birkin, which has sold at auction for $382,000.

Like You, Ariana Grande Is So Over the Kanye West and Drake Feud

Business Insider notes that Birkins can range from $40,000 to $500,000, so without a more comprehensive look at Drake's closet, there's no telling exactly how much he spent on his future wife's bag collection.

"It's overwhelming high luxury,"Drake said of his home, closet included. "That message is delivered through the size of the rooms and the materials and details of the floors and the ceilings."

Drake is hardly the first celebrity to confess their love for the Birkin. Kris Jenner has an entire room of them, her daughter Kylie promised the world that her own spawn, Stormi, would have a Birkin as her first bag, and even first lady Melania Trump has a few of them in rotation. 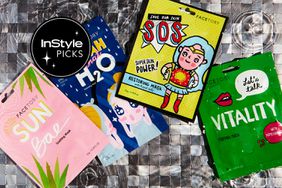 The 7 Best Sheet Masks of 2023, According to Our Testers