West and his wife, Catherine FitzGerald, have been married since 2010.

After The Affair actor Dominic West and Lily James were seen together in Rome over the weekend — doing much, much more than just sightseeing — West's wife, Catherine FitzGerald (she also happens to be the Viscountess Lambton), was reportedly shocked and devastated to learn about the situation from the tabloids. E! News reports that West and James are currently working together on The Pursuit of Love, a miniseries based on a novel by Nancy Mitford. The two share a manager.

"Catherinehas seen the pictures and she's devastated. I came over to speak with her as soon as I knew about them," a friend told the Daily Mail. "Catherine has been trying to speak with Dominic, but he's not answering his phone. She's totally shocked because she didn't know anything was going on. They were very much together, so this is completely out of the blue. She thought they had a good marriage and now it's probably over. That's how she feels right now but the two of them need to speak but at the moment, she's lost for words."

While some are speculating that the affection (kissing, hair-caressing) could be for their project, JustJared notes that The Pursuit of Love is a period piece and the two were photographed in modern-day clothing.

West and FitzGerald have been married since 2010, though the Daily Mail's photographs show West without his wedding band. Thet couple has four children together, Dora, Senan, Francis, and Christabel. West also has a daughter from a previous relationship. Neither FitzGerald or West (or James) has officially commented on the photos. James was last linked to Chris Evans after the two were seen together in London. 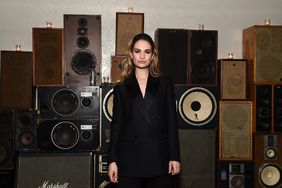