It's a long way from an Ohio high school. Dianna Agron made her theatrical debut last night in McQueen, a play inspired by the late visionary designer Alexander McQueen, which opened in London's West End.

Agron, who has become a dark brunette for the role, stars as Dahlia, an obsessed fan who hides in a tree in the designer's London garden for 11 days and secretly watches him as he struggles to find inspiration for his new collection.

The play, a riff on McQueen's 2008 runway show "The Girl Who Lived in the Tree," takes place on the night she finally breaks into his house to steal a dress. McQueen catches her, but instead of calling the police, he lets her stay and the two embark on a journey through a dark, fantastical vision of London and encounter figures from McQueen's life such as his eccentric muse and mentor, the late Isabella Blow.

Agron left the theater on opening night loaded down with bouquets, and shared the experience on Twitter. "Flowers, sweet notes & an overwhelming response. Thank you to all that showed up to be our first audience tonight!" she wrote.

The former Glee star is evidently enjoying her new direction. "I would like to be here for ever," she told London newspaper Evening Standard in March. "I think there's probably no better way to strengthen your craft than on stage. There's something so special about it." 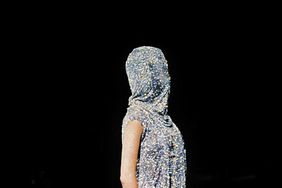