Happy 70th Birthday, Debbie Harry—We Love You More Than Ever

Only a select few style icons have truly stood the test of time, but Blondie's Debbie Harry leads the pack. The singer turns 70 today and decade after decade she continues to blow us away with her effortlessly chic fashion choices that range from straight-up punk to Studio 54 glam to debutante-with-an-edge elegance.

She came about her original look naturally back in the early 1970s: "We didn't read fashion magazines, back then—that was a whole other reality for us," she says in the book Chris Stein/Negative: Me, Blondie, and the Advent of Punk. Instead, Harry and her bandmates made due with what they could get their hands on. "In those days we were pretty experimental, inheriting clothes or swapping them, or picking up stuff from the thrift stores on Bowery." (What we wouldn't do for a time machine!)

Today, Harry is still hard at work and is currently touring with her band; they performed in New York's Central Park in June (above) and opened for Morrissey at Madison Square Garden last weekend. We raise a glass to you, Debbie—here's to another 20 years of rock and roll and fashion inspiration!

Get Inspired by These Rock Stars' Style
Was this page helpful?
Thanks for your feedback!
Tell us why!
Related Articles 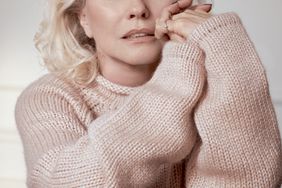